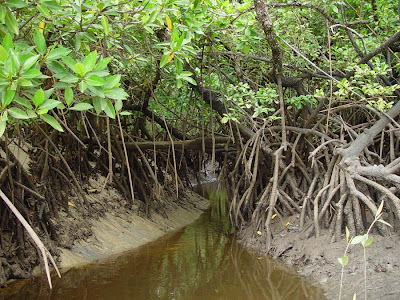 The flat swampy land is surrounded at the distance of a few miles by a semicircle of low hills, or rather by the edge of a country elevated perhaps two hundred feet above the sea. The old city of Olinda stands on one extremity of this range. One day I took a canoe & proceeded up one of the channels to visit it; I found the old town from its situation both sweeter & cleaner than that of Pernambuco. — I must commemorate, as being the first time during the four & a half years we have been wandering about, that I met with a want of politeness amongst any class of people; I was refused in a sullen manner at two different houses, & obtained with difficulty from a third permission to pass through their gardens to an uncultivated hill for the purpose of taking a view of the country. I feel quite glad this happened in the land of the "Brava Gente"; for I bear them no good will. — A Spaniard would have been ashamed at the very thought of refusing such a request, or of behaving to any one with rudeness. — The channel by which we came to & returned from Olinda is bordered on each side by Mangroves which spring like a miniature forest out of the greasy mud banks. the bright green color of these bushes always reminds me of the rank grass in a Church-yard: both are nourished by putrid exhalations; the one speaks of death past, the other too often of death to come.
Syms Covington Journal

On 13th pm unmoored ship and went in THE Roads again. As the neap tides were coming, and THERE WAS barely water sufficient at this time. AS WE WERE on the sand bank at high water thirteen feet, AND our ship drawing nearly 13 feet, WE had a pilot to take the ship in and also out. The reef, which is coral, appears inside like a wall; with guns placed all along as posts, for shipping to make fast their hawsers. The lighthouse (revolving light) stands AT THE extremity of THE reef and close to it a small fort! The other extremity of THE reef reaches to the mainland, inside of which runs a large river. This reef forms a complete breakwater, and of course the water inside very smooth. The reef runs North and South, WITH the lighthouse on THE North side. In the Roads, there is a great deal of motion.
Posted by Arborfield at 07:56