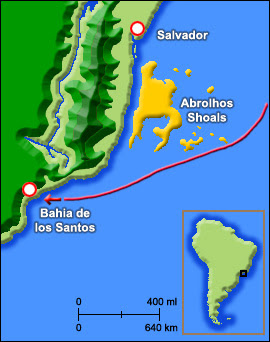 Anchored in Bahia de los Santos. The first aspect of the city & its outskirts, with the beauties of which we were formerly so much delighted, had lost part of its charms. The novelty & surprise were gone, & perhaps our memories had, in the long interval, exaggerated the colours of the scenery. There existed, however, as we afterwards discovered, a more true reason, in the loss of some of the finest Mango trees, which during the late disturbances of the negroes had been cut down. We staid here four days, in which time I took several long walks.
Syms Covington Journal

Sailed from Ascension July 23rd and after a good passage (a distance of 1400 miles), anchored in Bahía, Brazil, August 1st am, the third time of our coming here. Bahía is nearly due West from Ascension. On our arrival here the first news was that the natives had taken a 1000 miles of coast towards the North from the Portuguese some time since, which they still retained.
Posted by Arborfield at 07:18