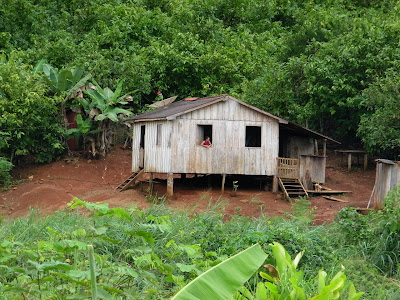 I was glad to find my enjoyment of tropical scenery, from the loss of novelty, had not decreased even in the slightest degree. The elements of the scenery are so simple, that they are worth mentioning as a proof on what trifling circumstances exquisite natural beauty depends. The country may be described as a quite level plain of about three hundred feet elevation which has been in every part worn into flat-bottomed valleys. This structure is remarkable in a granitic land, but it is nearly universal in all those softer formations, of which plains usually are composed. The whole surface is covered by various kinds of stately trees, interspersed with patches of cultivated ground, amidst which stand houses, convents & Chapels. — It must be remembered that within the tropics, the wild luxuriance of nature is not lost, even in the vicinity of large cities; the natural vegetation of the hedges & hill sides overpowers in picturesque effect, the artificial labor of man. Hence in but few parts, the bright red soil affords a strong contrast to the universal clothing of green. From the edges of the plain there are distant glimpses either of the ocean or of the great bay, bordered by low wooded shores, & on the surface of which numerous boats & canoes show their white sails. Excepting from these points, the range of vision is very limited; following the level pathways, on each hand alternate peeps into the wooded valleys below can alone be obtained. Lastly I must add, that the houses & especially the sacred edifices are built in a peculiar & rather fantastic style of architecture. They are all white-washed, so that when eliminated by the brilliant sun of midday & as seen against the pale blue sky of the horizon, they stand out more like shadows than substantial buildings. Such are the elements, but to paint their effects is an hopeless endeavour.
Syms Covington Journal

Between the island of Ascension (Africa) and Bahía (Brazil) we find a wide difference, viz. the former which is solely lava, the latter of a rich and most luxurient herbage, with hill and dale, and birds of a most beautiful plumage. I went into the country four days during our stay here.
Posted by Arborfield at 07:33