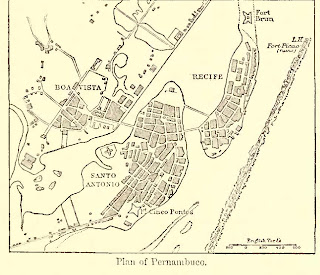 The most curious thing which I saw in the neighbourhood of Pernambuco, is the reef that forms the harbor. It runs for a length of several miles in a perfectly straight line, parallel to & not far distant from the shore; it varies in width from thirty to sixty yards; it is quite dry at low water, has a level smooth surface, & is composed of obscurely stratified hard sandstone: hence at the first sight it is difficult to credit that it is the work of nature & not of art. Its utility is great; close within the inner water, there is a good depth of water, & ships lie moored to old guns, which are fixed in holes on the summit. — A light-house stands on one extremity, & around it the sea breaks heavily. In entering the harbor, a ship passes within thirty yards round this point, & amidst the foam of the breakers; close by, on the other hand, are other breakers, which thus form a narrow gateway: it is almost fearful to behold a ship running, as it appears, headlong into such dangers.
The modern name for the port (also used in Darwin's time) is Recife, literally, "the Reef" (Roger R.)
Posted by Arborfield at 07:49