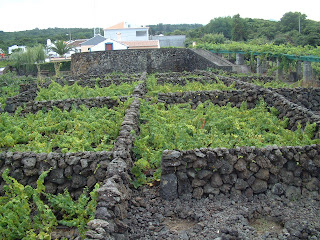 Another day I set out early in the morning to visit the town of Praya seated on the NE and of the island. — The distance is about fifteen miles; the road ran the great part of the way not far from the coast. The country is all cultivated & scattered with houses & small villages. I noticed in several places, from the long traffic of the bullock waggons, that the solid lava, which formed in parts the road, was worn into ruts of the depth of twelve inches. This circumstance has been noticed with surprise, in the ancient pavement of Pompeii, as not occurring in any of the present towns of Italy. At this place the wheels have a tire surmounted by singularly large iron knobs, perhaps the old Roman wheels were thus furnished. The country during our morning's ride, was not interesting, excepting always the pleasant sight of a happy peasantry. The harvest was lately over, & near to the houses the fine yellow heads of Indian corn, were bound, for the sake of drying, in large bundles to the stems of the poplar trees. These seen from a distance, appeared weighed down by some beautiful fruit,—the very emblem of fertility.—One part of the road crossed a broad stream of lava, which from its rocky & black surface, showed itself to be of comparatively recent origin; indeed the crater whence it had flowed could be distinguished. The industrious inhabitants, have turned this space into vineyards, but for this purpose it was necessary to clear away the loose fragments & pile them into a multitude of walls, which enclosed little patches of ground a few yards square; thus covering the country with a network of black lines.
The town of Praya is a quiet forlorn little place; Many years since a large city was here overwhelmed by an earthquake. It is asserted the land subsided, and a wall of a convent now bathed by the sea is shown as a proof: the fact is probable, but the proof not convincing. I returned home by another road, which first leads along the Northern shore, & then crosses the central part of the Island.— This North Eastern extremity is particularly well cultivated, & produces a large quantity of fine what. The square, open fields, & small villages with white washed churches, gave to the view as seen from the heights, an aspect resembling the less picturesque parts of central England. — We soon reached the region of clouds, which during our whole visit have hung very low & concealed the tops of the mountains. For a couple of hours we crossed the elevated central part, which is not inhabited & bears a desolate appearance. When we descended from the clouds to the city, I heard the good news that observations had been obtained, & that we should go to sea the same evening.
The anchorage is exposed to the whole swell of the Southern ocean, & hence during the present boisterous time of year is very disagreeable & far from safe.
Posted by Arborfield at 07:26