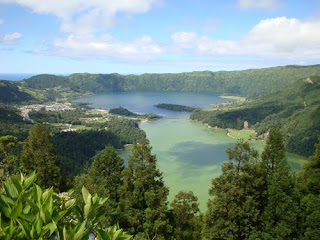 By the following morning, we were off the city, & a boat was sent on shore.— The Isld of St Michaels is considerably larger & three times more populous & enjoys a more extensive trade than Terceira. — The chief export is the fruit, for which a fleet of vessels annually arrives. Although several hundred vessels are loaded with oranges, these trees on neither island appear in any great numbers. No one would guess that this was the great market for the numberless oranges imposed into England. St Michaels has much the same open, semi-green, cultivated patchwork appearance as Terceira. The town is more scatted; the houses & churches there & throughout the country are white washed & look from a distance neat and pretty. The land behind the town is less elevated than at Terceira, but yet rises considerably; it is thickly studded or rather made up of small mammiformed hills, each of which has sometime been an active Volcano. — In an hours time the boat returned without any letters, and then getting a good offing from the land, we steered, thanks to God, a direct course for England.
Posted by Arborfield at 07:46