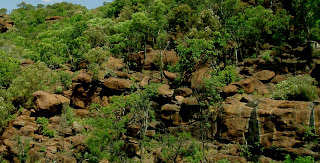 Rio de Janeiro
Felt much better & able throughily to enjoy our days rest here. — In this case the Fazenda consists of a piece of cleared ground cut out of the almost boundless forest. — On this are cultivated the various products of the country: Coffee is the most profitable: the brother of our host has 100,00 trees, producing on an average 2lb. per tree, many however singly will bear 8lb. or even more. Mandeika (or Cassada) is likewise cultivated in great quantity: every part is useful. The leaves & stalks are eat by the horses; the roots, ground into pulp, pressed dry, & then baken makes the Farinha; by far the most important article of subsistence in the Brazils. From this is prepared the Tapioka of commerce. It may be mentioned as a curious though well known fact that the expressed juice is a most deadly poison; a few years ago at this Fazenda a Cow died from drinking some of it. Feijôa or beans are much cultivated & form a most excellent vegetable: one bag bringing sometimes 80. Sugar Cane is also grown. And rice in the swampy parts. Signor Fig. planted three bags & they produced 320.
.
The house was simple & uncomfortable, & formed like an English barn: it was well floored, & thatched with reeds. The windows merely had shutters. Interiorly it was divided into rooms by partitions which did not reach the roof. At one end was a sitting room of the whole breadth, the gilded chairs & sofas were oddly contrasted by the white washed walls. Beyond this was a longitudinal division, one side of which was the dining room, on the other, 4 bedrooms belonging to the family. Separated from this building only by a few inches was another long shed, the adjoining end formed the kitchen: the other, large storehouses & granaries. These formed one line on the other side of a cleared space where coffee was drying, were the bedrooms for guests, stables & working shops for the blacks, who had been taught different trades. Surrounding these were the huts of about 110 negroes, whom Signor & one white man as a manager contrive to keep in perfect order. The house, built on a hill at the foot of which a brook runs, overlooked the cultivated ground, & was bounded by an horizon of green luxuriant forest. — The pasturage abounded in cattle, goats, sheep & horses; near the house, oranges, Bananas flourished almost spontaneously. — The woods are so full of game, that they had hunted & killed a deer on each of the three days previous to our arrival. — This profusion of food shows itself at the dinners, when if the tables do not groan, the guests surely do. — Each person is expected to eat of every dish; one day having, as I thought, nicely calculated so that nothing should go away untasted, to my utter dismay a roast turkey & a pig appeared in all their substantial reality. — During the meals, it was the employment of a man to drive out sundry old hounds & dozens of black children which together at every opportunity crawled in. — As long as the idea of slavery could be banished, there was something exceedingly fascinating in this simple & patriarchal style of living. — It was a such perfect retirement & independence of the rest of the world. — As soon as any stranger is seen arriving, a large bell is set tolling & generally some small cannon are fired; thus it is announced to the rocks & woods & to no one else. — One morning I walked out before daylight to admire the solemn stillness, when it was broken by the morning hymn raised on high by the whole body of the blacks; in this manner do they generally begin their dayly work. — In such Fazendas as these I have no doubt the slaves pass contented & happy lives. — Signor Manoel Joaquem da Figuireda is a man of an intelligent & enterprising character. — Some of the roads through his estate were cut in a European fashion; in a years time he believes he shall able so to shorten the road to Campos (a large city) that instead of two days ride it will be only one: He has likewise fixed a saw-mill, which answers admirably in sawing the rose-wood. — This cut into thick planks is floated down to Macaè. — If many were to imitate the example of this man, what a difference a few years would produce in the Brazils.
Posted by Arborfield at 08:40