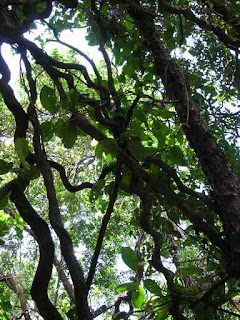 Rio de Janeiro
We left our miserable sleeping place before sunrise. — The road passed through a narrow sandy plain, lying between the sea & the interior salt lagoons. — The number of beautiful fishing birds such as Egrets, Cranes &c & the succulent plants assuming such fantastical forms gave to the scene an interest which it would not otherwise have possessed. — The few stunted trees were loaded by parasitical plants, amongst which the beauty & delicious fragrance of some of the Orchideae were most to be admired. — As the sun rose, the day became very hot, & the reflection of the light & heat from the white sand was very distressing. The thermometer in my pocket stood at 96°. — Dined at Mandetiba: Therm, in shade 84°. — The beautiful view quite refreshed us; the distant wooded hills were seen over & reflected in the perfectly calm water of an extensive lagoon. — As the Venda here was a very good one, & I have the pleasant but rare remembrance of an excellent dinner, I will be grateful & describe it as the type of its Class. These houses are often large, & are built of thick upright posts, with boughs interwoven, which are afterwards plastered. They seldom have floors, & never glazed windows, but are generally pretty well roofed. — Universally the front part is open, forming a kind of veranda; in which are placed tables & benches. — On each side are the bed rooms where the passenger may sleep, as comfortably as he is able, on wooden platforms, covered by a thin straw mat. The Venda stands in a court, where the horses are fed. — On first arrival we unsaddle our horses & give them their Indian corn. — Then with a low bow ask the Signor to do us the favour to give us something to eat. — "Anything you choose Sir" is his answer. — For the few first times vainly I thanked providence for guiding us to so good a man. — The conversation proceeding, the case usually became deplorable: "Any fish can you do us the favor of giving?". — "Oh no Sir." "Any soup." "No Sir." Any bread. "Oh no Sir." — Any dried meat. "Oh no Sir. — If we were lucky, by waiting 2 hours we obtained fowls rice & farinha. — It not unfrequently happens that the guest is obliged to kill with stones the poultry, for his own dinner.
When really exhausted with fatigue & hunger, we timorously hinted we should be glad of our meal. — The pompous, &, though true, most unsatisfactory answer was given, "it will be ready when it is ready". — If we had dared to remonstrate any further, we should have been told to proceed on our journey as being too impertinent. — Their charges are, however, exceedingly moderate, but they will, if they are able, cheat. — The hosts are most ungracious & disagreeable in their manners. — their houses & their persons are often filthily dirty. — the want of the common accomodation of forks, knives, spoons is even common. I am quite sure no cottage, no hut in England could be found in a state so utterly destitute of what we considered comforts. — At Campos Novos, we fared sumptuously, having rice & fowls, biscuit & wine & spirits for dinner, coffee in the evening. & with it for breakfast fish. — good food for the horses, & this only cost 2s 6d per head. — Yet this same man, being asked if he knew anything of a whip which one of the party lost, gruffly answered, "How should I know? Why did you not take care of it. — I suppose the dogs have eat it".
Leaving Mandetiba, we continued to pass through an intricate wilderness of lakes, in some of which were fresh, in others salt water shells.)

We at last entered the forest; the trees were very lofty, & what was always to be remarked in them was the whiteness of the boles, this at a distance adds much to their effect. — I see by my note book, "wonderful, beautiful flowering parasites" invariably this strikes me as the most novel object in a Tropical forest. — On the road we passed through tracks of pasturage, much injured by the enormous conical ants nests, which in height were about 12 feet — they give to the plain exactly the appearance of the Mud Volcanoes at Jorullo, figured by Humboldt. — We arrived after it was dark at Ingetado: having been 10 hours on horseback. I never ceased to wonder, from the beginning to the end of the journey, at the amount of labour which these horses are capable of enduring: I presume it is from being in a country more congenial to their original nature. — and from the same cause they seem far better than English horses to recover injuries & wounds.
Posted by Arborfield at 07:54