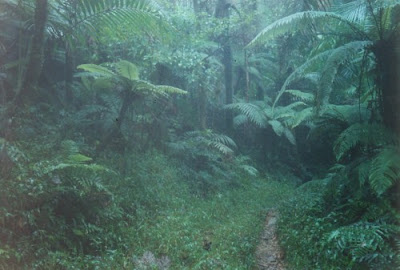 Rio de Janeiro
These two days were spent at Socêgo, and was the most enjoyable part of the whole expedition; the greater part of them was spent in the woods. I succeeded in collecting many insects and reptiles.
The woods are so thick and matted that I found it quite impossible to leave the path. The greater number of trees, although so lofty, are not more than from 3 to 4 feet in circumference. These are interspersed with others of a much greater size. Signor Manuel was making a canoe 70 feet long, and on the ground was left 40 feet, so that there were 110 feet of straight solid trunk. The contrast of the Palms amongst other trees never fails to give the scene a most truly tropical appearance: the forests here are ornamented by one of the most elegant, the Cabbage-Palm; with a stem so narrow, that with the two hands it may be clasped, it waves its most elegant head from 30 to 50 feet above the ground. The soft part, from which the leaves spring, affords a most excellent vegetable. The woody creepers, themselves covered by creepers, are of great thickness, varying from 1 to nearly 2 feet in circumference. Many of the older trees present a most curious spectacle, being covered with tresses of a liana, which much resembles bundles of hay.
If the eye is turned from the world of foliage above, to the ground, it is attracted by the extreme elegance of the leaves of numberless species of Ferns & Mimosas. Thus it is easy to specify individual objects of admiration; but it is nearly impossible to give an adequate idea of the higher feelings which are excited; wonder, astonishment and sublime devotion fill and elevate the mind.
Posted by Arborfield at 08:02