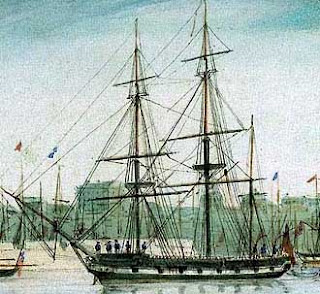 Rio de Janeiro
In the morning I landed with Earl at the Palace steps; we then wandered through the streets, admiring their gay & crowded appearance. — The plan of the town is very regular, the lines, like those in Edinburgh, running parallel, & others crossing them at right angles. — The principal streets leading from the squares are straight & broad; from the gay colours of the houses, ornamented by balconys, from the numerous Churches & Convents & from the numbers hurrying along the streets, the city has an appearance which bespeaks the commercial capital of Southern America. — The morning has been for me very fertile in plans: most probably I shall make an expedition of some miles into the interior, — & at Botofogo Earl & myself found a most delightful house which will afford us most excellent lodgings.
I look forward with the greatest pleasure to spending a few weeks in this most quiet & most beautiful spot. — What can be imagined more delightful than to watch Nature in its grandest form in the regions of the Tropics?- We returned to Rio in great spirits & dined at a Table d’Hote, where we met several English officers serving under the Brazilian colours. — Earl makes an excellent guide, as he formerly lived some years in the neighbourhood: it is calamitous how short & uncertain life is in these countries: to Earls enquiries about the number of young men whom he left in health & prosperity, the most frequent answer is he is dead & gone. — The deaths are generally to be attributed to drinking: few seem able to resist the temptation, when exhausted by business in this hot climate, of strongly exciting themselves by drinking spirits.
Posted by Arborfield at 06:54