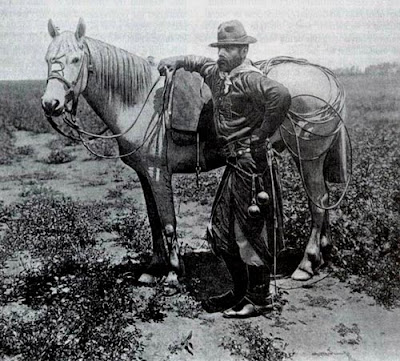 Las Minas
In the morning we pursued rather a rambling course; as I was examining several beds of marble. We crossed some fine plains abounding with cattle, here also were very many Ostriches. I saw several flocks of between 20 & 30. When seen on the brow of a hill against the clear sky they form a fine spectacle. Some of them are very tame; if, after approaching close, you suddenly gallop in pursuit, it is beautiful to see them, as a sailor would express it, "up with their helm" & make all sail, by expanding their wings right down the wind. At night we came to the house of Don Juan Fuentes, a very rich man, but a stranger to both my companions. Upon arriving we entered the room where the Signora and Signoritas were sitting, & after talking on indifferent subjects (which I observe is always the formula) for a few minutes; permission was asked to pass the night there. As a matter of course this is granted to all strangers; & a room allotted to us. We then unsaddle our horses & bring the recon's &c into the room, this latter was not so good as cowshed, but it contained beds, & for bed-clothes the cloths belonging to the recon are used.

Shortly after our arrival one of the great herds of cattle was driven in. The cattle having so much space to wander over are very wild & it is necessary several times in the week to drive the herd into a Corral or enclosure of stakes, for the night. & thus accustom them to one central place. About a dozen Gauchos on horseback drove them in & near to the house separated a few for the purpose of killing them. This afforded a very animated chace, for the cattle run nearly as fast as a horse, & the poor beasts know full well the fatal Lasso. After seeing such a herd & such a number of horses the miserable house of Don Juan was curious. The floor is hardened mud; there are no glass windows, a few of the roughest chairs & stools & two small tables was all the furniture in the room. For supper there was a huge pile of roasted meat & another boiled with some pumpkin, in the centre was a mug of cold water, there were scarcely forks, plates or spoons sufficient, & every thing, table-cloth &c filthily dirty. there was no bread, salt, or vegetables, or anything more than water to drink; & this the house of a large landed proprietor.
The evening was spent in smoking & with a little impromptu singing accompanied by the Guitar. All the women remained huddled up in one corner & did not sup with the men. And such are the luxuries which wealth here purchases!
Posted by Arborfield at 07:15