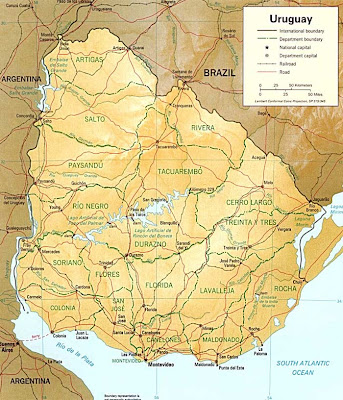 Maldonado
The torrents of rain almost entirely prevent me doing anything. It is impossible to go any distance into the country; as all the rivers are unusually full, & a bridge is an invention scarcely known in these parts.
The city of Maldonado is in reality only a small village; as is universally the case in Spanish, town, all the streets run in parallel lines cutting each other at right angles, & in the centre is the Plaza with its church. I never saw so quiet, so deserted, a looking place; it has scarcely any trade, & none by water until these few last years; it appears only to be a collection of land-owners & a few of the necessary tradesmen, such as blacksmiths & joiners, who do all the business for a circuit of 50 miles round. Nearly the only produce of the country is cattle & horses. These are both in wonderful numbers.
Captain Fitzroy’s Journal:
The Beagle returned to Monte Video, to procure carpenters, plank, and copper for the Adventure. I found that she was so fine a vessel, and so sound, that it was well worth while to copper her entirely afresh, with a view to her future operations among islands in the Pacific, where worms would soon eat through places on a vessel's bottom from which sheets of copper had been torn away. At this time the Adventure's copper was complete, but thin, and as the carpenters said it would not last above two years more with certainty, I determined to copper her forthwith, and make one substantial refit do for all. Here, to my great regret, Mr. Hamond decided to return to England, and we consequently lost a valuable member of our small society.
Posted by Arborfield at 07:56