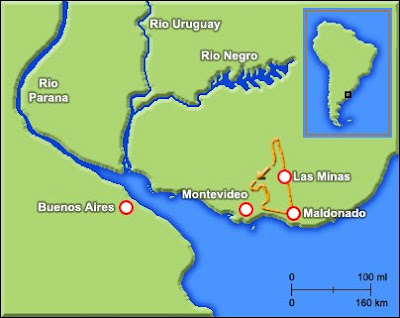 Maldonado
The weather being fine I persuaded my two guides & companions to start on our ride. — Don Francisco Gonzales, & Morante, a sort of servant of his, were both well armed, & having plenty of friends & relations in the country were just the people for my purpose. We drove before us a troop of fresh horses; a very luxurious way of travelling as there is then no danger of having a tired or lame one. — I agreed to pay 2 dollars a day (about 8s..6d) & all expences on the road. — Such is the hospitality in this country, that the latter for 12 days only cost me about 16 dollars. — As the rivers were very full we only went a short distance; a little beyond the head of the Laguna del Potrero. I was inclined to think my guides took too much precaution with their pistols & sabres; but the first bit of news we heard on the road was, that the day before a traveller to M: Video had been found, with his throat cut, lying dead on the road. — it happened close to a cross, a record of a former murder.
.
We dined at a Pulperia, where there were present many Gauchos (this name only means "countrymen" & those who dress in this manner & lead their life). — I here found out I possessed two or three things which created unbounded astonishment. — Principally a small pocket compass. — in every house, I entered I was asked to show its powers, & by its aid told the direction of various places. — This excited the liveliest admiration, that I a perfect stranger should know the road (for direction & road is synonimous in this open country) to places where I had never been. — At one house, a young woman, who was ill sent to entreat me to come to her room & show her the compass. If their surprise was great, mine was much greater to find such ignorance; & this amongst people, who possess their thousands of cattle & "estancia's" of great extent. — It can only be accounted for by the circumstance that this retired part of the country has seldom been visited by foreigners. I was asked whether the earth or sun moved; whether it was hotter or colder to the North; where Spain was & many more such questions. — Most of the inhabitants have an indistinct idea, that England, London, N. America are all the same place; the better informed well know that England & N: America are separate countries close together; but that England is a large town in London. — I had in my pocket some promethians, which I ignited by biting them between my teeth; to see this the whole family was collected; at one place and I was once offered a dollar for a single one. — My washing my face in the morning caused at Las Minas much speculation; at Las Minas a very superior tradesman closely cross-questioned me about so singular a practice; & likewise why on board we wore our beards, for he had heard from my guides that we did so. — He eyed me with much suspicion; perhaps he had heard of ablutions in the Mahomedan religion; knowing me to be a Heretic; perhaps probably he came to the conclusion that all Heretics are Turks. — It is the universal custom to ask for a nights lodging at the first convenient house. — The general astonishment at the compass &c &c and other things was to a certain degree advantageous, as with that & the long stories my guides told of my breaking stones, knowing venemous from harmless snakes, collecting insects &c I paid them for their hospitality. — Being able to talk very little Spanish, I was looked at with much pity, wonder & a great deal of kindness. — Some few however, I think, gave me the credit of having a good deal of the Dousterswivel* about me. — I am writing as if I was had been amongst the inhabitants of central Africa. Banda Oriental would not be flattered by the comparison, but such was my feeling when amongst them. — (C) We slept at a friend of Gonzales; & in the morning proceeded on to the town of Las Minas.
.
* Dousterswivel: A swindler, who obtains money under the promise of finding buried wealth by a divining-rod. (Scott: Antiquary.)
Posted by Arborfield at 06:53