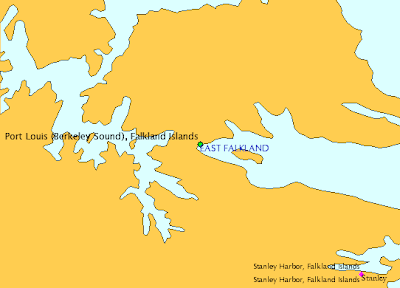 Captain Fitzroy’s Journal:
On the 13th the Adventure arrived: she had almost completed her examination of the west, south, and south-east outer coasts, in a very satisfactory manner, having been greatly forwarded and helped by Mr. Low's minute acquaintance with every port, and almost every danger. Our tender sailed to continue her coasting examination on the 21st. She returned on the 26th, and sailed again on the 30th. Meanwhile our own boats were constantly occupied in and near Berkeley Sound and Port William.

When I visited the settlement it looked more melancholy than ever; and at two hundred yards' distance from the house in which he had lived, I found, to my horror, the feet of poor Brisbane protruding above the ground. So shallow was his grave that dogs had disturbed his mortal remains, and had fed upon the corpse. This was the fate of an honest, industrious, and most faithful man: of a man who feared no danger, and despised hardships. He was murdered by villains, because he defended the property of his friend; he was mangled by them to satisfy their hellish spite; dragged by a lasso, at a horse's heels, away from the houses, and left to be eaten by dogs.

Besides my own acquaintance with him and opinions derived from the personal knowledge of the Beagle's officers, some of whom had known Brisbane when his vessel, the Saxe Cobourg, was wrecked in Fury Harbour (owing to no fault of his), Mr. Weddell bears testimony to his character on many occasions, particularly by an observation in page 48 (Weddell's Voyage), where he says, "I had full confidence in the care and ability of Mr. Brisbane." (1823.)
In 1830 Mr. Brisbane was wrecked on the eastern coast of Tierra del Fuego, near Policarpo Cove, (54° 38′ S.), when sealing there in partnership with Mr. Bray, who afterwards commanded the sealing schooner 'Transport,' lost in 1833, at Hope Harbour. (...)
The vessel in which Brisbane and Bray were wrecked, was driven ashore in a northerly gale, while sealing near Policarpo Cove. Their crew consisted of about twenty men, most of whom had fire-arms, and plenty of ammunition. Though it will swell yet more the catalogue of his disasters, I must add that Brisbane was once wrecked on South Georgia, and escaped thence to Monte Video in a shallop, which he and his companions in distress built out of the wreck of their sealing vessel.

I have now by me two of the tools, almost the only ones, which they had to use: one is a cooper's adze, nearly worn down to the middle; and the other a saw, made out of a piece of iron hoop, fixed to a wooden frame.
Posted by Arborfield at 07:49