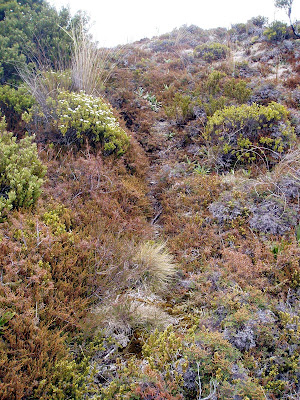 E. Falkland Islands
During the night it rained, & the next day was very stormy with much hail & snow. From the number of cows which have been killed there is a much larger proportion of bulls. These wander about by two & threes or by themselves & are very savage. I never saw such magnificent beasts; they truly resemble the ancient sculptures, in which the vast neck & head is but seldom seen amongst tame animals. The young bulls run away for a short distance, but the old ones will not stir a step, excepting to rush at man & horse; & many horses have thus been killed. — One old bull crossed a boggy stream & took up his stand on the side opposite to us. We in vain tried to drive him away & failing were obliged to make a large circuit. The gauchos in revenge were determined to render him for the future innocuous; it was very interesting to see how art completely mastered huge force. One lazo was thrown over his horns as he rushed at the horse, & another round his hind legs; in a minute the monster was stretched harmless on the ground. During the whole time we only saw one troop of wild horses & this was to the North of the hills — it is a curious thing that these horses although very numerous always remain in the East end of the island. The Gauchos cannot account for it.

We slept in a valley in the neck of land which joins the rincon del toro, the great peninsula to the SW point of the island. The valley was pretty well sheltered from the cold wind; but there was very little brushwood for making a fire; the Gauchos soon found what to my surprise made nearly as hot a fire as coals, it was the bones of a bullock, lately killed but all the flesh picked off by the Vultures. They told me that in winter time they have often killed an animal, cleaned the flesh from the bones with their knives, & then with these very bones roasted the meat for their dinner. What curious resources will necessity put men to discover!
Posted by Arborfield at 07:53