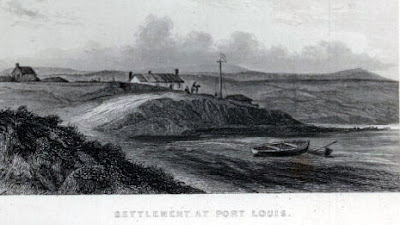 E. Falkland Islands
Early in the morning I set out with 6 horses & two Gauchos. These were the only two Spaniards who were not directly concerned with the murder; but I am afraid my friends had a very good idea of what was going to take place. However they had no temptation to murder me & turned out to be most excellent Gauchos, that is they were dexterous hands in all the requisites of making the camp-life comfortable. The weather was very boisterous & cold, with heavy hail storms.

We got on however pretty well; excepting some little geology nothing could be less interesting. The country is uniformly the same, an undulating moorland; the surface covered with light brown withered grass, & some few very low shrubs all growing out of an elastic peaty soil. There is one main range of quartz rock hills, whose broken barren crests gave us some trouble to cross. Few sorts of birds inhabit this miserable looking country: there are many small flocks of geese feeding in the valleys, & solitary snipes are common in all parts. On the South side of the range of hills we came into the best country for the wild cattle; we did not however see very many, because the Murderers had by hunting them so much, driven them amongst the mountains.

These men only killed the cows, & then took out the tongue & piece of meat from the breast, when this was finished they killed another. By their own account they must have killed more than 200 head. We saw plenty of the half decayed carcases. In the evening we came across a nice little herd. St Jago soon separated a fat cow, he threw his balls, they hit her legs, but did not entangle her: he dropped his hat to mark the place where the balls fell, uncoiled his lazo & again we commenced the chase; at last he caught her round the horns. The other Gaucho had gone on with the horses, so that St Jago had some difficulty in killing the furious beast. The horses generally soon learn for their own safety to keep the lazo tight when their rider dismounts, when this is the case the man can easily hamstring & thus secure the beast. Here the horse would not stand still, & it was admirable to see with what dexterity St Jago dogged about the cow till he contrived to give the fatal touch to the main tendon of the hind leg. After which, driving his knife into the head of the spinal marrow the animal dropped as if struck by lightning. St Jago cut off enough flesh with the skin, & without any bones, to last for our expedition. We then rode on to our sleeping place.

Meat roasted with its skin (carne con cuero) is known over all these parts of S. America for its excellence, it bears the same relation to common beef, which venison does to mutton. I am sure if any worthy alderman was once to taste it; carne con cuero would soon be celebrated in London.

Syms Covington Journal:
Anchored Berkeley Sound, Port Louis. On our arrival here, which was the second time, we found Brisbane, the Governor, had been shot with three others by the gauchos. It was said, he was very tyrannical to the whole of people in general. Two of the murderers were secured by H.M.S. Challenger a short time before our arrival, and two by our own ship, who were sent to England. A new Governor (a lieutenant of the Navy) was left by the Challenger, with marines for his guard. One of the Challenger's boats capsized here; a lieutenant and one or two others were drowned. Some of the clothes of the former, and a knife, were picked up on the beach by our people.
Posted by Arborfield at 07:52