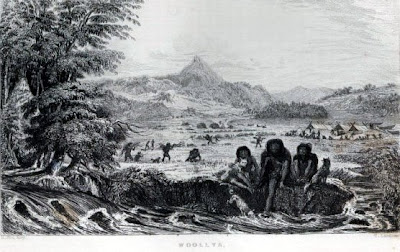 [Woollya]
Tierra del Fuego
Jemmy went to sleep on shore but came in the morning for breakfast. The Captain had some long conversations with him & extracted much curious information: they had left the old wigwams & crossed the water in order to be out of the reach of the Ohens men who came over the mountains to steal. They clearly are the tall men, the foot Patagonians of the East coast. Jemmy staid on board till the ship got under weigh, which frightened his wife so that she did not cease crying till he was safe out of the ship with all his valuable presents. Every soul on board was as sorry to shake hands with poor Jemmy for the last time, as we were glad to have seen him. I hope & have little doubt he will be as happy as if he had never left his country; which is much more than I formerly thought. He lighted a farewell signal fire as the ship stood out of Ponsonby Sound, on her course to East Falkland Island.
Captain Fitzroy’s Journal:
Next morning Jemmy shared my breakfast, and then we had a long conversation by ourselves; the result of which was, that I felt quite decided not to make a second attempt to place Matthews among the natives of Tierra del Fuego. Jemmy told me that he knew very little of his own language; that he spoke some words of English, and some Tekeenica, when he talked to his family; and that they all understood the English words he used. York and Fuegia left him some months before our arrival, and went in a large canoe to their own country; the last act of that cunning fellow was to rob poor Jemmy of all his clothes; nearly all the tools his Tekeenica 'friends' had left him; and various other necessaries. Fuegia was dressed as usual, and looking well, when they decamped: her helpmate was also well clothed, and had hardly lost anything I left with him. Jemmy said "York very much jaw," "pick up big stones," "all men afraid." Fuegia seemed to be very happy, and quite contented with her lot. Jemmy asserted that she helped to "catch (steal) his clothes," while he was asleep, the night before York left him naked.

Not long after my departure in Febuary 1833, the much-dreaded Oens-men came in numbers, overland, to Woollӯa; obliged Jemmy's tribe to escape to the small islands, and carried off every valuable which his party had not time to remove. They had doubtless heard of the houses and property left there, and hastened to seize upon it — like other 'borderers.' Until this time York had appeared to be settled, and quite at ease, but he had been employed about a suspiciously large canoe, just finished when the inroad was made. He saved this canoe, indeed escaped in it, and afterwards induced Jemmy and his family to accompany him "to look at his land." They went together in four canoes (York's large one and three others) as far west as Devil Island, at the junction of the north-west and south-west arms of the Beagle Channel: there they met York's brother and some others of the Alikhoolip tribe; and, while Jemmy was asleep, all the Alikhoolip party stole off, taking nearly all Jemmy's things, and leaving him in his original condition. York's fine canoe was evidently not built for transporting himself alone; neither was the meeting with his brother accidental. I am now quite sure that from the time of his changing his mind, and desiring to be placed at Woollӯa, with Matthews and Jemmy, he meditated taking a good opportunity of possessing himself of every thing; and that he thought, if he were left in his own country without Matthews, he would not have many things given to him, neither would he know where he might afterwards look for and plunder poor Jemmy.

While Mr. Bynoe was walking about on shore, Jemmy and his brother pointed out to him the places where our tents were pitched in 1833, where the boundary line was, and where any particular occurrence happened. He told Mr. Bynoe that he had watched day after day for the sprouting of the peas, beans, and other vegetables, but that his countrymen walked over them without heeding any thing he said. The large wigwams which we had erected with some labour, proved to be cold in the winter, because they were too high; therefore they had been deserted after the first frosts. Since the last depredations of the Oens-men, he had not ventured to live any longer at Woollӯa; his own island, as he called it, affording safer refuge and sufficient food.

Jemmy told us that these Oens-men crossed over the Beagle Channel, from eastern Tierra del Fuego, in canoes which they seized from the Yapoo Tekeenica. To avoid being separated they fastened several canoes together, crossed over in a body, and when once landed, travelled over-land and came upon his people by surprise, from the heights behind Woollӯa. Jemmy asserted that he had himself killed one of his antagonists. It was generally remarked that his family were become considerably more humanized than any savages we had seen in Tierra del Fuego: that they put confidence in us; were pleased by our return; that they were ready to do what we could explain to be for their interest; and, in short, that the first step towards civilization — that of obtaining their confidence — was undoubtedly made: but an individual, with limited means, could not then go farther. The whole scheme, with respect to establishing a missionary with the Fuegians who were in England, among their countrymen, was on too small a scale, although so earnestly assisted by Mr. Wilson, Mr. Wigram, Mr. Coates, and other kind friends.

I cannot help still hoping that some benefit, however slight, may result from the intercourse of these people, Jemmy, York, and Fuegia, with other natives of Tierra del Fuego. Perhaps a ship-wrecked seaman may hereafter receive help and kind treatment from Jemmy Button's children; prompted, as they can hardly fail to be, by the traditions they will have heard of men of other lands; and by an idea, however faint, of their duty to God as well as their neighbour.

That Jemmy felt sincere gratitude is, I think, proved by his having so carefully preserved two fine otter skins, as I mentioned; by his asking me to carry a bow and quiver full of arrows to the schoolmaster of Walthamstow, with whom he had lived; by his having made two spear-heads expressly for Mr. Darwin; and by the pleasure he showed at seeing us all again.

As nothing more could be done, we took leave of our young friend and his family, every one of whom was loaded with presents, and sailed away from Woollӯa.
Posted by Arborfield at 21:17