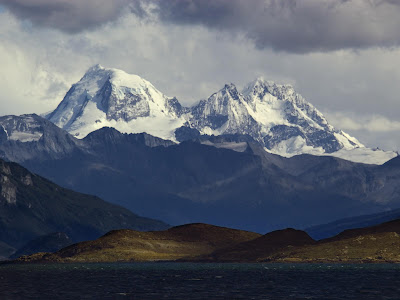 Tierra del Fuego
Came to an anchor in the Northern part of Ponsonby sound. We here enjoyed three very interesting days: the weather has been fine & the views magnificent. The mountains, which we passed today, on the Northern shore of the Channel are about 3000 feet high, — they terminate in very broken & sharp peaks; & many of them rise in one abrupt rise from the waters edge to the above elevation. The lower 14 or 1500 feet is covered with a dense forest. A mountain, which the Captain has done me the honour to call by my name, has been determined by angular measurement to be the highest in Tierra del Fuego, above 7000 feet & therefore higher than M. Sarmiento. It presented a very grand, appearance; there is such splendour in one of these snow-clad mountains, when illuminated by the rosy light of the sun; & then the outline is so distinct, yet from the distance so light & aerial, that one such view merely varied by the passing clouds affords a feast to the mind. Till near Ponsonby Sound we saw very few Fuegians; yesterday we met with very many; they were the men Jemmy Button was so much afraid of last year, & said they were enemies to his tribe; the intervening & thinly inhabited space of ground, I suppose, is neutral between the belligerents. We had at one time 10 or 12 canoes alongside; a rapid barter was established Fish & Crabs being exchanged for bits of cloth & rags. It was very amusing to see with what unfeigned satisfaction one young & handsome woman with her face painted black, tied with rushes, several bits of gay rags round her head. Her husband, who enjoyed the very unusual priviledge in this country of possessing two wives, evidently became jealous of all the attention paid to his young wife, & after a consultation with his two naked beauties, was paddled away by them. As soon as a breeze sprung up, the Fuegians were much puzzled by our tacking; they had no idea that it was to go to windward & in consequence all their attempts to meet the ship were quite fruitless. It was quite worth being becalmed, to have so good an opportunity of looking & laughing at these curious creatures; I find it makes a great difference being in a ship instead of a boat. Last year I got to detest the very sound of their voices; so much trouble did it generally bring to us.

But now we are the stronger party, the more Fuegians the merrier & very merry work it is. Both parties laughing, wondering & gaping at each other: we pitying them for giving us good fish for rags &c they grasping at the chance of finding people who would exchange such valuable articles for a good supper.
Posted by Arborfield at 07:17