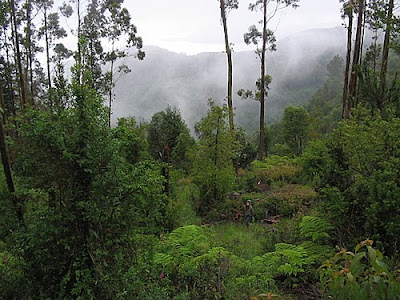 Valdivia
We continued to ride through the uncleared forest; & only occassionally met an Indian on horseback, or a troop of fine mules bringing Alerce planks or corn from the Southern plains. In the afternoon one of the horses tired; we were then on the brow of a hill which commanded a fine view of the Llanos. The view of these open plains was very refreshing, after being hemmed in & buried amongst the wilderness of trees. The uniformity of a forest soon becomes very wearisome; this West coast makes me remember with pleasure the free, unbounded plains of Patagonia; yet with the true spirit of contradiction, I cannot forget how sublime is the silence of the forest. The Llanos are the most fertile & thickly peopled parts of the country: they possess the immense advantage of being nearly free from trees; before leaving the forest we crossed some flat little lawns, around which single trees were encroaching in the manner of an English park. — It is curious how generally a plain seems hostile to the growth of trees: Humboldt found much difficulty in endeavouring to account for their presence or absence in certain parts of S. America; it appears to me that the levelness of the surface very frequently determines this point; but the cause why it should do so I cannot guess. — In the case of Tierra del Fuego the deficiency is probably owing to the accumulation of too much moisture; but in Banda Oriental, to the North of Maldonado, where we have a fine undulating country, with streams of water (which are themselves fringed with wood) is to me, as I have before stated, the most inexplicable case.

On account of the tired horse I determined to stop close by at the Mission of Cudico; to the Friar of which I had a letter of introduction. — Cudico is an intermediate district between the forest & the Llanos: there are a good many cottages with patches of corn & potatoes nearly all 529 belonging to Indians. The Plank-built Chapel is small & in sad decay; the Government is building a school for the Indian children. — The Padre tells me they are very easily taught any subject, & that the school will be the means of doing a great deal of good. — All the Indians belonging to Valdivia are "reducidos & Christians"; they are divided into tribes, & have their Caciques: their quarrels & crimes are superintended by Spanish authorities, & I do not quite understand what power the Cacique has, excepting that of oppressing his subjects. The Indians to the North, about Imperial & Arauco, are yet very wild & not converted; they all have however much intercourse with the Spaniards. — There are 26 tribes more or less dependant on Valdivia; each of these have Spanish residents, called "Capitanes delos amigos", whose office is to interpret & plead for their respective tribes with the Governor of Valdivia. The Caciques of three or four of the tribes, who have remained very faithful & have been of service during the wars, receive a pension of 30 dollars a year (6 pounds sterling); a sort of bribe with which they are well satisfied to remain quiet. — Some of the tribes are large, one is supposed to have 3–4000 Indians. — The Padre says that the Indians do not much like coming to mass, but otherwise show much respect to religion; the greatest difficulty is in making them observe the ceremonies of marriage. — The wild Indians take as many wives as they can support; & a Cacique will sometimes have more than ten: — on entering his house, the number can be told by that of the separate fires. This last plan must be a good one to prevent quarrelling. The wives live each a week in turns with the Cacique; but all are employed in weaving Ponchos &c for his advantage: to be the wife of a Cacique is an honor much sought after by the Indian women. — The besetting sin with all is that of drunkedness; it seems wonderful that they are able to drink enough of our sour weak cyder to make themselves drunk. — But it is certain that they remain in this state for whole days together & are then very dangerous & fierce. — The Indian temperament, all over the Americas, seeks with singular eagerness the excitation produced by Spirituous liquors.

The common Indian dress to the South of Valdivia is a dark woollen Poncho, beneath which they wear nothing, & short tight trousers & leggings. To the North, they wear a garment folded round their bodies in the manner of the Chilipa of the Gauchos. This alone will immediately point out from which side any Indian comes. — They all wear their long hair bound by a red band, & without covering to their heads. Both of which tastes are constantly seen in the Indians on the other side of the Cordilleras. Some of the women wear curiously shaped & very large plates of silver in their ears; & I saw one man with a similar necklace; which at a distance looked like a white ruff. — It appears to me that these Indians have a slightly different physiognomy from any which I have seen; they are more swarthy, their hair is not so straight & in greater profusion, their cheek bones are very prominent: they are good sized men. — The expression of their faces is generally grave & even austere; & possesses much character; this may either pass for goodnatured bluntness or for fierce determination. — On the road a traveller meets with none of that humble politeness so universal in Chiloe; some however gave their "Mari-Mari" (good morning) with promptness. — The resemblance very likely is imaginary, but the long hair, the grave & much lined features, & dark complexion, called to my mind old portraits of Charles the First. — The independence of manners of these Indians is probably a consequence of the long & victorious wars which they have fought with the Spaniards. — At present all the Southern Indians seem in a fair way of continuing subjects of Chili. — They are said to be very good horsemen; they do not much use the lazo, or the Bolas, & this latter only to the North. — The Chusa is the proper Weapon of the country. — It is odd what difficulty is found in ascertaining even the most simple question from the Spaniards. I was assured by what would appear excellent authority, that the Indian language of Chiloe is quite distinct from that of these Araucanians: yet I now am convinced they are the same. — The greater part of the latter talk some Spanish.

I spent the evening very pleasantly, talking with the Padre. — He was exceedingly kind & hospitable; & coming from St Jago had contrived to surround himself with some few comforts. Being a man of some little education, he bitterly complained of the total want of society; — with no particular zeal for religion, no business or pursuit, how completely must this mans life be wasted.
Posted by Arborfield at 07:24

It was Darwin's birthday today, he turned 26, and it is interesting to see that he does not mention this in his diary. Although he does mention the evening spent pleasantly in conversation with Padre.