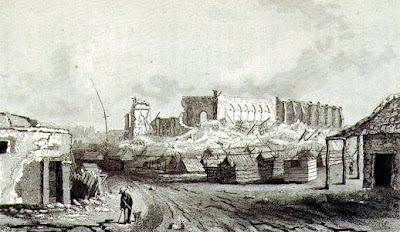 Valdivia
This day has been remarkable in the annals of Valdivia for the most severe earthquake which the oldest inhabitants remember. — Some who were at Valparaiso during the dreadful one of 1822, say this was as powerful. — I can hardly credit this, & must think that in Earthquakes as in gales of wind, the last is always the worst. I was on shore & lying down in the wood to rest myself. It came on suddenly & lasted two minutes (but appeared much longer). The rocking was most sensible; the undulation appeared both to me & my servant to travel from due East. There was no difficulty in standing upright; but the motion made me giddy. I can compare it to skating on very thin ice or to the motion of a ship in a little cross ripple.

An earthquake like this at once destroys the oldest associations; the world, the very emblem of all that is solid, moves beneath our feet like a crust over a fluid; one second of time conveys to the mind a strange idea of insecurity, which hours of reflection would never create. In the forest, a breeze moved the trees, I felt the earth tremble, but saw no consequence from it. At the town where nearly all the officers were, the scene was more awful; all the houses being built of wood, none actually fell & but few were injured. Every one expected to see the Church a heap of ruins. The houses were shaken violently & creaked much, the nails being partially drawn. — I feel sure it is these accompaniments & the horror pictured in the faces of all the inhabitants, which communicates the dread that every one feels who has thus seen as well as felt an earthquake. In the forest it was a highly interesting but by no means awe-exciting phenomenon.

The effect on the tides was very curious; the great shock took place at the time of low-water; an old woman who was on the beach told me that the water flowed quickly but not in big waves to the high-water mark, & as quickly returned to its proper level; this was also evident by the wet sand. She said it flowed like an ordinary tide, only a good deal quicker. This very kind of irregularity in the tide happened two or three years since during an Earthquake at Chiloe & caused a great deal of groundless alarm. In the course of the evening there were other weaker shocks; all of which seemed to produce the most complicated currents, & some of great strength in the Bay. The generally active Volcano of Villa-Rica, which is the only part of the Cordilleras in sight, appeared quite tranquil. I am afraid we shall hear of damage done at Concepcion. I forgot to mention that on board the motion was very perceptible; some below cried out that the ship must have tailed on the shore & was touching the bottom.

Captain Fitzroy’s Journal:
Many of us were in the town on the 20th of February, at the time of that great earthquake, which ruined so many places besides the city of Concepcion: an awful event.

Syms Covington Journal:
February 20th we felt a very severe shock of an earthquake; this happened when we were lying on the ground, resting ourselves. The sensation was something like a ship in a gentle seaway, the trees could be perceived to wave a lot too and fro in a north easterly direction; the sea came up of a sudden six feet, and as suddenly retired, but there was done here no damage.