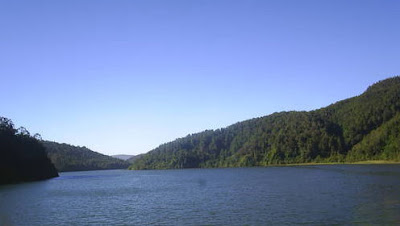 Valdivia
The morning after our arrival in the Port, two boats were sent to the town of Valdivia. This is seated on the banks of a river 9 or 10 miles distant from the anchorage. — At the latter place there are only a few cottages & some strong fortresses. — I ought rather to say which were formerly strong; for now most of the guns have been carried to Valparaiso. — This port is well known from Lord Cochranes gallant attack when in the service of La Patria. — We followed the course of the river; occassionally passing a few hovels & cleared patches of ground, & sometimes meeting a canoe with an Indian family. The scenery otherwise is one unbroken forest. The town of Valdivia is seated on the low banks of the river: it is completely hidden in a wood of Apple trees; the streets are merely paths in an orchard. — I never saw this fruit in such abundance. — There are but few houses; even I think less than in S. Carlos; they are entirely built of Alerce planks. The manners & habits of the upper classes are evidently superior to what we meet with at poor Chiloe. There is perhaps also more pure Spanish blood. — Beyond this, there is little to show that Baldivia is one of the most ancient colonies on this West coast of America.

Our first impression on seeing this quiet little town certainly has been a pleasing one. — There are several Englishmen residing here (as indeed in every corner of S. America); their number has lately been increased by an addition of seven run-away convicts from Van Diemen's land. They stole (or made) a vessel & ran straight for this coast; when some distance from the land they sunk her & took to their boats. — They all took wives in about a weeks time; & the fact of their being such notorious rogues appears to have weighed nothing in the Governors opinion, in comparison with the advantage of having some good workmen. — In all these Spanish colonies, it appears to me that the committal of enormous crimes lessens but very little the public estimation of any individual; that is, as long as they remain unpunished. The Chilians in St Jago think it very hard that the Englishmen cease to hold communication with any of their countrymen who may have acted dishonorably. — This most partly be the consequence of their absolving, forgiving religion. — I am afraid however, this Christian charity, both of the public & the Church, is chiefly extended to the rich.

Captain Fitzroy’s Journal:
Every facility and kindness in his power was offered to us by Don Isaac Thompson, the Yntendente:—and by his secretary, Don Francisco Solano Perez, I was presented with a rare edition of Febrés's 'Arte de la Lengua Chilena,' which has been of much use in explaining the meaning of aboriginal words and names. Don Francisco wished me to take another curious work, but I declined; and have often regretted since that I did not ask him to let me copy a map in it which contained the tracks of Spanish missionaries from Castro in Chilóe to the lake of San Rafael, isthmus of Ofqui, and archipelago of islands in latitude 48-9° S. I thought another copy might be found at Lima, but during my subsequent stay there, not one could be discovered.

The town of Valdivia, formerly dignified by the appellation of city, disappointed our party extremely. It proved to be no more than a straggling village of wooden houses, surrounded with apple-trees; and the only building, even partially constructed of stone, was a church.

An English carpenter, who had served on board the Beagle, in 1828, but had since settled on the banks of the river Cruces, about thirty miles from Valdivia, came on board his old ship one day, to see those whom he knew. It happened that I had formerly been of some assistance to him, and he was naturally glad to oblige me, by giving such information about the country and the natives as he was able to impart; and having lived nearly four years among them, his accounts were not only interesting, but, I think, worthy of credence.† As some of these were confirmed by what I heard from residents at Valdivia, and I have no doubt of their truth, I shall mention them without hesitation in the course of my narrative.
Posted by Arborfield at 07:30