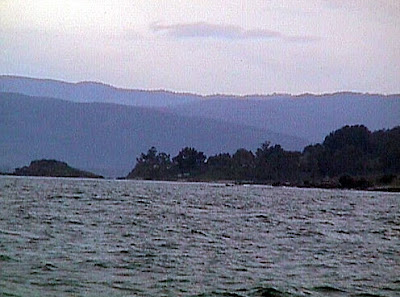 Valdivia
The forest is no where cleared away; the geological structure being evidently the same with that of the central parts of Chiloe, the external features are the same. We have everywhere on the coast bold rocky points, which more inland are covered up by Tertiary plains of different altitudes.

Captain Fitzroy’s Journal:
We anchored in the deceiving port of Valdivia. I say deceiving, because it offers to the eye ample space and the utmost security, while, in fact, the safe anchorage is very limited; so much mud and sand being brought down by the river that extensive banks are formed, and increase yearly. We were struck by the apparent strength of the fortresses, built originally by the Dutch in 1643, but improved and increased by the Spaniards. Now, however, their strength is but apparent; for a closer inspection shows that they are almost in ruins and the guns out of order; indeed so nearly disabled, that they could hardly fire a salute without danger. Around the port are high hills, completely covered with wood; and they attract clouds so much, that almost as great a quantity of rain falls there as on the western shores of Chilóe. Several rivers empty themselves at this one mouth, which is the only opening among hills that form a barrier between the ocean and an extensive tract of champaign country, reaching to the Cordillera of the Andes. The principal of these rivers are the Calla-calla and the Cruces; their tributaries are very numerous, few countries being better watered by running streams than that about Valdivia.

Syms Covington Journal:
Anchored in the Bay of Valdivia. The entrance to the bay is a very high bluff land; VALDIVIA has two forts, ONE fort on each side going up harbour, but now in ruins. The place for shipping is close by the southern battery, where THERE is also a small village. The town is distant from here about ten miles, higher up the river, the houses of which are chiefly built of the lercy (or pine cedar of the country). The population… including Spaniards, Creoles, native Americans and foreigners; of the former there are but few. The country here is one dense mountainous forest, part of the Cordillera. In our wanderings, we frequently met with cottages and small cultivated patches of land of the peasants.
Posted by Arborfield at 07:28