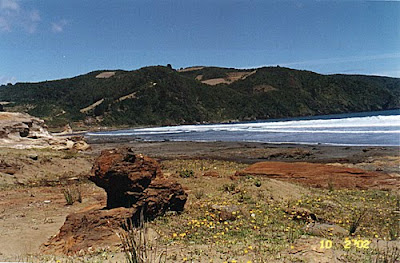 Valdivia
We finally sailed from Valdivia & continued the survey up the coast. About thirty miles to the Northward the country becomes lower & more level, neither is it quite so concealed in forest. — We saw much cattle; & several groups of Indians on horseback appeared to watch with interest our movements. Seeing us so close to the land, they perhaps hoped we should be wrecked; a fate which happened not long since to a French Whaler, the crew of which were robbed of every single thing in a very short time. — It is said that the country of these Araucanians is the most fertile in Chili; my friend the Padre at Cudico bitterly regretted that it should be so wasted & wished with Christian humanity, that all the provinces would unite & make a complete end of the Indian race.

This is a dangerous coast; shoal water extends to some distance in the offing, & a heavy swell is constantly setting right on shore. A ship in a calm in such a situation is most awkwardly placed. — The swell lost us an anchor & 16 fathoms of cable; We only anchored for an hour, & in heaving up, the jerks were so violent that the cable snapped in two. — This is the sixth anchor since leaving England!

Captain Fitzroy’s Journal:
I was informed that there is coal in many places about Valdivia; but I did not see any. We sailed on the 22d, after receiving, on all occasions, the kindest treatment from the residents.

As we passed along the low coast about the river Tolten, numbers of Indians on horseback, and armed with lances, were seen riding along the shore, evidently watching our movements. This part of the coast is shoal, and at night would be dangerous, for the low land projects considerably, and would not then be readily seen. We could not distinguish the mouths of either the Tolten or the Imperial (or Cauten) quite satisfactorily, but as they are bar rivers—useless to shipping—I would not risk anchoring on so exposed a coast, or sending a boat away into such a surf as we saw breaking, without having more time at my disposal and a higher object in view.

On the Cauten was the city called Imperial—celebrated in Araucanian story—and near its site now live the Boroa tribe, some of whom have light-coloured eyes, fair complexions, and even red hair. I saw one of these Indians at Valdivia, who had blue eyes, but dark hair. She told me that in her own country, 'Boroa,' there were many with eyes like her's; that some were 'rubios,' that is, of a red and white complexion, and that a few had red hair. Her parents had told her, she said, that those people were descended from the 'Huincas.'* How the red hair originated is rather curious; I have heard of it from good authorities at other times, while in Chile.

* An Araucanian name for the Spaniards, signifying assassins.

Syms Covington Journal:
Sailed from Valdivia THE 22nd OF February.
Posted by Arborfield at 06:55