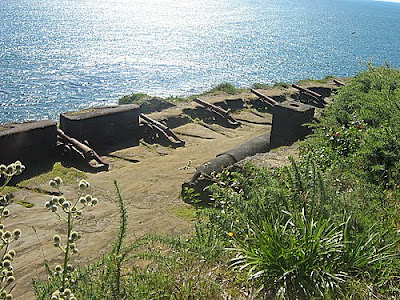 [Fort Niebla in 2007]
Valdivia
I crossed over to the Fort called Niebla, which is on the opposite side of the bay to the Corral where we are at anchor. — The Fort is in a most ruinous state; the carriages of guns are so rotten that Mr Wickham remarked to the commanding officer, that with one discharge they would all fall. The poor man trying to put a good face on it, gravely replied, "No I am sure Sir they would stand two!" The Spaniards must have intended to have made this place impregnable. There is now lying in the middle of the court-yard a little mountain of mortar, which rivals in hardness the rock on which it lies. — It was brought from Chili & cost seven thousand dollars. The revolution breaking out prevented its being applied to any purpose; but now it remains a monument to the fallen greatness of Spain. — I wanted to go to a house about a mile & half distant; my guide said it was quite impossible to penetrate the wood in a straight line; but he offered to lead me by the shortest way, following obscure cattle tracks: after all, the walk took no less than three hours! This man is employed in hunting strayed cattle; yet well as he must know the woods, he was not long since lost for two whole days & had nothing to eat. These facts convey a good idea of the impracticability of the forest of these countries. — A question often occurred to me, how long does any vestige of a fallen tree remain? This man showed me one which a party of fugitive Royalists had cut down fourteen years ago. — Judging from the state in which it was I should think a bole a foot and a half in diameter in thirty years would present a mere ridge of mould.
Posted by Arborfield at 08:17