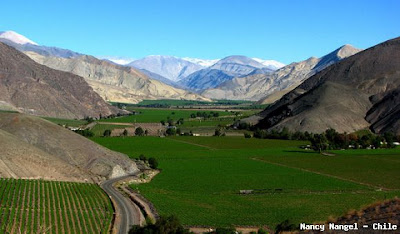 By noon we arrived at the Hacienda of Potrero Seco in the Valley of Copiapò. I was heartily glad of it; it is most disagreeable to hear whilst you are eating a good supper, your horse gnawing the post to which he is tied & to know that you cannot relieve his hunger. — the whole journey is a source of anxiety to see how fast you can cross the Traversia. To all appearance however the horses were quite fresh & no one could have told they had not eaten for the last 55 hours.

This Hacienda belonged to one of the British associations; their affairs when bankrupt were purchased by some English merchants; one of these, Mr Bingley, came out as managing agent. — I had a letter of introduction to him & by good luck he came from the town this day to the Estate. — To his credit, there is no land in the whole valley which looks in such good order. — At one time the whole was rented at 500 dollars now one mere part is let 1,800, & another 400.— He reserving the best part for himself. This is a specimen of the management of those mad associations. — This estate is called 14 leagues (perhaps 25 English miles) long: it is of course very narrow, seldom a mile & often of no breadth, that is the valley in some parts cannot be irrigated. — Generally it has a width of two fields. The whole is cultivated with the Clover of the country for the Pasturage of Mules. Mr Bingleys business is the shipment of Copper ores, but everything depends on the carriage of the ores to the Port. — There is so little land in the whole valley, that mules sufficient for the mines cannot be pastured. It would sound odd in England, the whole value of a mining business depending on the quantity of pasturage to be obtained by any individual. — The scarcity of cultivated land does not depend so much on the inequality or unfitness for irrigation, as on the little water. The river this year is remarkably full; at this Hacienda it reaches up to a horses belly, is about 15 yards wide & rapid; of course it grows gradually decreasing till it reaches the sea. This however happens rarely; for a period of 30 years not a drop ever entered the Pacifick. The inhabitants watch a storm in the Cordilleras with great interest; one good fall of snow secures water for the ensuing year. — This is of infinitely more consequence than rain in the lower country. With the latter, which often does not fall for two & even three years together, they are enabled to pasture the mules & cattle for some time in the mountains; but without Snow in the Andes desolation extends over the whole valley. — It is on record that three times nearly all the inhabitants have been obliged to emigrate to the South. The valley is said to contain 12,000 souls, but its produce is sufficient only for three months in the year; the rest being drawn from Valparaiso & the South. — Before the discovery of the famous Silver Mineral of Chanuncillo, Copiapò was in a rapid state of decay; now it is in a very thriving condition. The town which was completely over-thrown by an Earthquake has been rebuilt.

The valley of Copiapò runs in a very Southerly direction, so that it is of considerable length to its source in the Cordillera; it forms a mere green ribbon in a desert. Both the valleys of Guasco & Copiapò may be considered as islands to the Northward of Chili, separated by deserts in the place of Salt water. Beyond these, there is one other very miserable valley called Paposo, which contains about 200 people. Then we come to the real desert of Atacama, a far worse barrier than the most turbulent sea. At the present time there is plenty of water & every man irrigates his land as much as he likes; when it is scarce guards are sent to the sluices of all the Azequis to see they do not take more than their allotted number of hours in the week. — In consequence of this abundance & the rich nature of soil, which is much less gravelly than in the other valleys, the stripe of Vegetation is very luxuriant. But when the latitude 27° is considered, & that it is nearly in the same parallel with St Catherines on the coast of Brazil, it is surprising that there is no trace of a Tropical character in the Vegetation.
Posted by Arborfield at 08:23