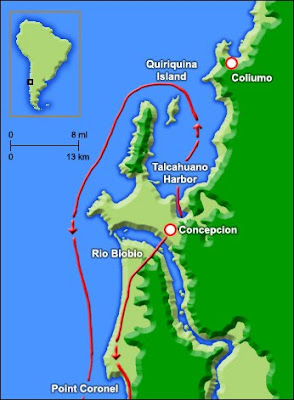 Copiapò
Returned to the Hacienda of Potrero Seco, & from there a long days ride to the town of Copiapò.

Captain Fitzroy’s Journal:
Anchored in the bay of Concepcion, off Talcahuano, at noon. As soon as I could get a boat I landed, and hastened to obtain information, horses, and a guide, as the commodore wished me to go to Captain Seymour, and concert measures for removing the crew and the remaining stores.

The captain of the port told Commodore Mason that the part of the coast on which the Challenger went shore, is quite inaccessible in any weather, but that boats had entered the mouth of the river Leübu, near Molguilla.

Lieutenant Collins (of the Challenger) had been at Talcahuano, trying to procure a vessel, in which the shipwrecked crew might embark by means of boats, at the Leübu, but not succeeding he had returned to his shipmates; whom he expected to find at the mouth of the river. It was said that a large body of Indians was in motion towards them, that the crew were short of provisions, and that they were becoming sickly. Assisted by the governor of Talcahuano, horses and a native guide were soon obtained; but I wanted a more energetic assistant, and engaged a Hanoverian who was used to the half Indian natives of the frontier, and well known among them. This man was Vogelberg, or Vergara, already mentioned. With orders and letters from Commodore Mason, accompanied by Vogelberg and H. Fuller, and provided with five horses, I left Talcahuano the same evening.

Being personally acquainted with the Yntendente, and his second in command, I hastened immediately to their houses at Concepcion, wishing to get an order to pass the Bio Bio River that night, and to procure a circular letter to the local authorities. Not a minute was lost by either of those zealous officers in attending to and complying with my requests. Alemparte left his dinner to write a circular letter, in his own hand; and neither he nor Colonel Boza would return to their respective parties, until they had ascertained that I was properly provided with horses and a guide, and that I required no further assistance.

Although orders were issued and the ferry-boat at her station, no crew were to be found, and only those men who belonged to the boat knew how to cross over safely. Vexatious as the delay seemed, I was afterwards glad of it; for judging by the work in day-light, I doubt our having ever reached the opposite bank with our horses, in a dark night.

While talking to Colonel Boza I remarked a watchful, wild-looking, young Indian, in a Chilian half-uniform, standing in the house. Something unusual in his manner attracted my notice though hurried, and I have since regretted losing that opportunity of acquainting myself with the son of Colipi, a famous cacique, who is the principal, and a very powerful leader of the northern Araucanians, though at present a friend to the Chilians. Colipi is a very tall and unusually strong man; his onset and his yell are talked of with a shudder, by those who have suffered from Indian hostility. Educating his son at Concepcion is one of the methods used to conciliate the 'Barbaro.'
Posted by Arborfield at 07:17