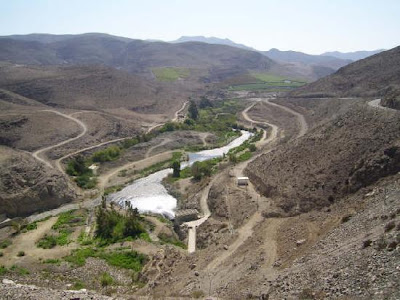 I staid here on account of my animals two days, & lived with Mr Hardy, an owner of Copper mines. — One of the days I rode down to the Port. — On a dear day the view up the valley is very fine; the opening being nearly straight is terminated at a great distance by the distinct outline of the snowy Cordillera; on each side an infinity of crossing lines blend together in a beautiful haze. The foreground is singular from the number of parallel & extensive terraces; & the included strip of green valley abounding with its willow bushes is contrasted on each hand by the naked hills. — From Capt. B. Halls description I had expected a valley luxuriant as those at C. de Verde, but it appears to me that all Capt. Halls beautiful descriptions require a little washing with a Neutral tint — it may partly destroy their charm but I am afraid will add to their reality. — But it may be well imagined how bare the hills must have been, since a shower had not fallen for 13 months. The inhabitants heard with the greatest envy of the rain in Coquimbo: From the looks of the weather they had strong expectations of equally good fortune and a fortnight afterwards this was verified. I was at Copiapo at the time, & there the people with equal envy talked of the abundant rain at Guasco. After two or three very dry years, that is perhaps with not more than one shower during the whole time, a rainy year generally follows, & this does more harm than even the drought. — The river swells & covers with gravel & sand the narrow strip of ground which alone is fit for cultivation; the flood also injures the irrigating ditches: great devastation had thus been caused three years ago. I called in the evening at the house of the "Governador"; the Signora was a Limerian & affected blue-stockingism & superiority over her neighbours. Yet this learned lady never could have seen a Map. Mr Hardy told me that one day a coloured Atlas was lying on a Pianoforte & this lady seeing it exclaimed, "Esta es contradanca". This is a country dance! "que bonita" how pretty! — On the other hand, the good people at Valdivia hearing so much about our making Charts thought everything a map. As they mistook a Sextant & artificial horizon, doubtless a piece of Music would have gone under the same name.

Captain Fitzroy’s Journal:
The Beagle left Herradura, and sailed towards Valparaiso. Anxious, however, to communicate with Don Diego Portales, who was staying at his country-house, near Papudo, I touched there in my way.
Posted by Arborfield at 07:59