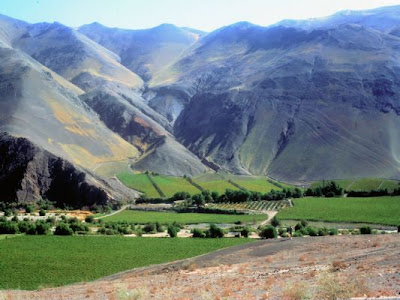 Copiapò
It is however a miserable looking place; I never saw so few houses furnished with any comforts. Every soul appears to be endeavouring to make money & see how soon (& in this they are quite right) they can leave it. Every person is more or less directly concerned with mines — & mines & ores are the sole subjects of conversation. Necessaries of all sorts are very dear. The town being 18 leagues from the sea port & the land carriage so expensive alone would nearly cause this. — A Fowl costs from 5 to 6 shillings; the fire wood or rather sticks are brought on donkeys from two & three days journey in the Cordilleras. Meat is nearly as dear as in England & pasturage for Animals a shilling per day; this for South America is wonderfully exorbitant.

Captain Fitzroy’s Journal:
Yet this was the house of a man of large property; and not by any means a bad one, compared with others in that country. Many reasons might be adduced to explain why Chilian gentlemen are reluctant to expend either time, trouble, or money in building good houses. Earthquakes are very frequent; property is yet insecure; and the country has been occupied, but so lately that there has not been any leisure time in which to think of more than the first necessaries of life. Noble trees surround this 'casa de hacienda.' No underwood impedes your riding at a rapid pace in any direction: and beyond the woody spaces, extensive plains stretch towards the sea and to the bank of the river. These plains are intersected by numerous streams, and adorned with irregular clumps or thickets of trees: smaller indeed than those which shade the 'casa de hacienda,' but of a size sufficient to shelter cattle.

This estate, which is not considered a large one in that country, comprises, besides many square leagues of wild hilly country, more than one hundred square miles of excellent land, well watered, abundantly wooded, and most pleasantly as well as conveniently situated. The owner is said to be a most worthy man, and numerous instances of his active goodness as well as excellent disposition, have been related to me at different times; one of which I must stop to relate.

My attendant, Vogelborg, passed near the door of Don Juan de Dios Rivera, while executing a commission entrusted to his most speedy despatch. Stopping a moment to ask the way, Don Juan remarked that he looked ill, and had better rest. Vogelborg thanked him, but explained the necessity of hastening onwards: in truth he was ill and very tired, though anxious to proceed. Don Juan then suggested the quicker method of forwarding the letters, entrusted to Vogelborg, by his own confidential servant, and forthwith despatched him upon one of his own horses, desiring Vogelborg to take possestion of an excellent bed; where he remained two days under the kind care of Don Juan de Dios and his wife, who till that time, had never seen him.

Abreast of Negra Beach is an anchorage, sheltered from the north and north-west winds by Point Coronel, but exposed to the southerly and west winds. Here, as well as in coves further south, much smuggling was carried on in the time of the Spaniards.

Leaving the sea-shore, and some slippery rocky places over which we were obliged to lead our horses, we ascended the heights of Colcura. For our reward, after a muddy scramble up to the top of a steep hill, we looked down upon a fine though but partially wooded country, forming an agreeable succession of valleys and high grounds; while to seaward there was an extensive view of the coast, with the island of Santa Maria in the distance.
Posted by Arborfield at 06:00