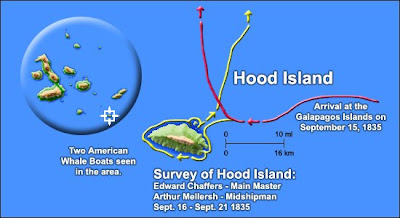 Galapagos
The next day we ran near Hoods Isd1 & there left a Whale boat. — In the evening the Yawl was also sent away on a surveying cruize of some length. — The weather, now & during the passage, has continued as on the coast of Peru, a steady, gentle breeze of wind & gloomy sky. — We landed for an hour on the NW end of Chatham Isd. — These islands at a distance have a sloping uniform outline, excepting where broken by sundry paps & hillocks. — The whole is black Lava, completely covered by small leafless brushwood & low trees. — The fragments of Lava where most porous are reddish & like cinders; the stunted trees show little signs of life. — The black rocks heated by the rays of the Vertical sun like a stove, give to the air a close & sultry feeling. The plants also smell unpleasantly. The country was compared to what we might imagine the cultivated parts of the Infernal regions to be.

This day, we now being only 40 miles from the Equator, has been the first warm one; up to this time all on board have worn cloth clothese; & although no one would complain of cold, still less would they of too much warmth. — The case would be very different if we were cruizing on the Atlantic side of the Continent.

Captain Fitzroy’s Journal
Assisted by a current running to the westward, we worked up to Hood Island during the night, and at daylight lowered a boat down and prepared her for Mr. Chaffers, who, with Mr. Mellersh, was to examine this island and the anchorages about it. Under the land we saw two whalers at anchor, which showed North American colours. The island is small—neither high nor low—rugged, covered with small sun-burnt brushwood, and bounded by a bold, rocky shore. Some small beaches of white sand are visible here and there.

As soon as Mr. Chaffers had set out, the Beagle steered towards Chatham Island, with a moderate breeze, which allowed us to prepare the yawl for another party, under Lieutenant Sulivan. At noon, Barrington Island was visible from the deck, and appeared to be distant about twenty miles; when with Messrs. Stewart and Johnson, and ten chosen seamen in the yawl, Mr. Sulivan left us to examine the central islands of the archipelago.

In continuing our course, we passed through several ripplings, apparently caused by the meeting of streams of current which set along the shores of Chatham Island, from the east towards the west. If not so caused, they must be the effects of currents passing over very uneven ground, but we got no bottom, with fifty fathoms of line. When such appearances are created by shoals, it should be remembered that the shallowest place is generally under the smoothest part, close to the ripple. Favoured by smooth water and fine weather, we passed close to the low south-west extreme, and anchored directly that point was found to defend us from the swell.

This part of the island is low, and very rugged. We landed upon black, dismal-looking heaps of broken lava, forming a shore fit for Pandemonium. Innumerable crabs and hideous iguanas started in every direction as we scrambled from rock to rock. Few animals are uglier than these iguanas; they are lizard-shaped, about three feet in length; of a dirty black colour; with a great mouth, and a pouch hanging under it; a kind of horny mane upon the neck and back; and long claws and tail. These reptiles swim with ease and swiftness—but use their tails only at that time. At a few yards from the water we found vegetation abundant, though the only soil seen was a little loose dusty earth, scattered upon and between the broken lava. Walking is extremely difficult. A hand-barrow was lying at the landing-place, which showed that terrapin were to be got near us, though we did not then see any. The men from whalers and sealing vessels carry the large terrapin, or land-tortoises, on these barrows.

Ascending a little hill, we were surprised to find much brush or underwood, and trees of considerable size, as large in the trunk as one man could clasp. These were prickly pears, and a kind of gum-tree: how their roots are able to penetrate, or derive nourishment from the hard lava, it is hard to say; for earth there is scarcely any. Wild cotton shrubs are numerous. This first excursion had no tendency to raise our ideas of the Galāpagos Islands.
Posted by Arborfield at 07:50