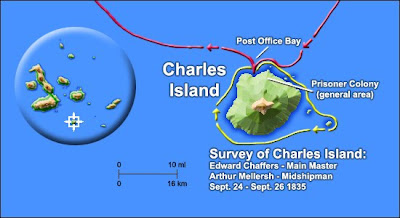 Galapagos
Crossed over & came to an anchor at Charles Island. Here there is a settlement of only five to 6 years standing. An Englishman Mr. Lawson is now acting as Governor. By chance he came down to visit a Whaling Vessel & in the morning accompanied us to the Settlement.

Note: Mr Nicholas O. Lawson was an Englishman serving the Republic of the Equator, or Ecuador.

Captain Fitzroy’s Journal
While becalmed we tried the clamms in fifty fathoms water, and brought up as much sand as would fill a bucket, but nothing curious. Afterwards we had a breeze, and passed Barrington Island pretty closely. It is not high, yet the shores are bold and fronted by cliffs; the more elevated parts appear to be level, and rather woody. This night was spent under sail between Charles and Hood Islands.
Posted by Arborfield at 11:58