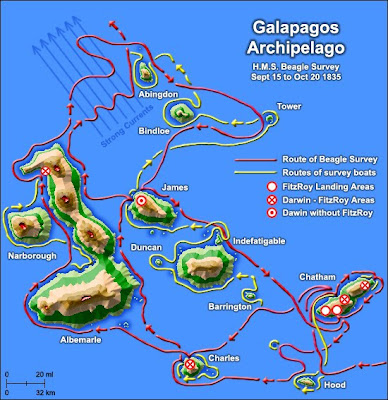 Galapagos
On the 15th we were employed in surveying the outer coast of Chatham Isd the S. Eastern one of the Archipelago.

Captain Fitzroy’s Journal
Uncertain of the strength, and even of the direction of the currents—though aware that at times the former is very considerable—we were anxiously looking out for land, when what appeared to be an islet was seen from the mast-head. This seeming islet turned out to be the summit of Mount Pitt, a remarkable hill at the north-east end of Chatham Island. (Charles Island of Cowley, 1684). As the breeze and current carried us onwards, the tops of other hills successively appeared, and for a short time looked very like a cluster of islets.

Gradually rising above the horizon, the greater part of Chatham Island became distinctly visible: in this neighbourhood it is not often that the air near the water is clear enough to allow of very distant high land being thus gradually raised above the horizon of an eye at the mast-head; for, in general, clouds hang about these islands, and the atmosphere itself is hazy. Towards evening the higher parts of the land were clouded over, but we were near enough to see that the island was very rugged—in some places quite barren—in others covered with a stunted and sun-dried brushwood—and that the heights, on which the clouds hung, were thickly clothed with green wood. The shores seemed to be bold, and easy to approach, though not to land upon, because of a continual high surf.

A number of little craters (as they appeared to be) and huge irregular-shaped masses of lava rock, gave a strangely misleading appearance to the lower parts of the island; and when first seen through that indistinct glimmer which is usually noticed over land on which a hot sun is shining, were supposed to be large trees and thick wood.* Hood Island, small and rather low, was seen before dusk, when we tacked and stretched to seaward for a few hours.
Posted by Arborfield at 10:40