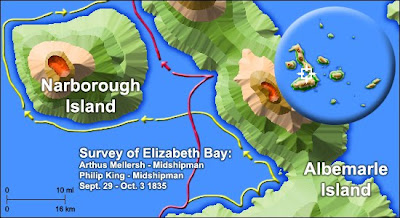 Galapagos
The next day, a light breeze carried us over the calm sea, which lies between Narborough & Albermale Isd. In the latter, high up, we saw a small jet of steam issuing from a Crater. — Narborough Isld presents a more rough & horrid aspect than any other; the Lavas are generally naked as when first poured forth. — When H.M.S. Blonde was here there was an active Volcano in that Island. — After sun-set, came to an anchor in Banks cove in Albermale Isd & which cove subsequently turned out to be the Crater of an old Volcano.

Captain Fitzroy’s Journal
This morning we passed a remarkably fine American whaler, the Science, carrying nine whale-boats! On the south-eastern height of Albemarle, smoke was seen issuing from several places near the summit, but no flame. Profiting by every breeze, we hastened towards Tagus (or Banks) Cove.

Narborough Island is exactly like a part of Albemarle — a great volcano, whose base is surrounded by an extensive field of lava: it is utterly barren and desolate. A few mangroves, on the sandy beaches near Albemarle Island, are not seen in the distance; neither are there enough of them even to diminish the dismal appearance of the island.

We entered the passage in the afternoon, and anchored in the little cove first described by Capt. Pipon, who then commanded H.M.S. Tagus. This cove is the crater of an extinct volcano, and its sides are so steep as to be almost inaccessible.*

* In 1825 H.M.S. Blonde, commanded by Lord Byron, anchored here. In her voyage the black and the red (or brown) iguanas are described, and it is stated that a specimen of the black kind was brought to England from Mexico. Lord Byron saw a volcano burning on Narborough Island.
Posted by Arborfield at 08:22