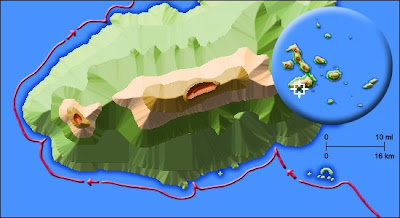 Galapagos
Anchored at Noon in a small cove beneath the highest & boldest land which we have yet seen. — The Volcanic origin of all is but too plainly evident: Passed a point studded over with little truncated cones or Spiracles as some Author calls them; the Craters were very perfect & generally red-coloured within. The whole had even a more work-shop appearance than that described at Chatham Isd. A calm prevented us anchoring for the night.

Captain Fitzroy’s Journal
We passed this night under easy sail, off the south-west extreme of Albemarle Island; and on the 29th we found a small cove, in which we anchored; but such a wild-looking place—with such quantities of hideous iguanas as were quite startling! Hence I despatched Mr. Mellersh and Mr. King, to examine the depth of Elizabeth Bay, and rejoin us beyond Narborough Island; we then weighed, and continued our examination of this unearthly shore. Passing a low projecting point, our eyes and imagination were engrossed by the strange wildness of the view; for in such a place Vulcan might have worked. Amidst the most confusedly heaped masses of lava, black and barren, as if hardly yet cooled, innumerable craters (or fumeroles) showed their very regular, even artificial looking heaps. It was like immense iron works, on a Cyclopian scale!

When this lava flowed from the heights it must have been stopped rather suddenly (cooled) by the water; for the lava cliffs are in some places twenty, and in others forty feet high, while close to them there is water so deep that a ship could not anchor there, even in a calm while the sea is quite smooth. Until we rounded this point the wind was very strong, eddying round the high south-west cape; but here we were becalmed, and passed some anxious hours, till at length light variable airs carried us off-shore.
Posted by Arborfield at 07:46