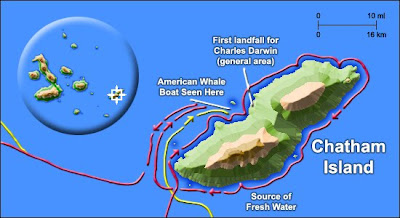 Galapagos
The Beagle was moved into St Stephens harbor. We found there an American Whaler & we previously had seen two at Hoods Island. — The Bay swarmed with animals; Fish, Shark & Turtles were popping their heads up in all parts. Fishing lines were soon put overboard & great numbers of fine fish 2 & even 3 ft long were caught. This sport makes all hands very merry; loud laughter & the heavy flapping of the fish are heard on every side. — After dinner a party went on shore to try to catch Tortoises, but were unsuccessful. — These islands appear paradises for the whole family of Reptiles. Besides three kinds of Turtles, the Tortoise is so abundant; that [a] single Ship's company here caught from 500–800 in a short time. — The black Lava rocks on the beach are frequented by large (2–3 ft) most disgusting, clumsy Lizards. They are as black as the porous rocks over which they crawl & seek their prey from the Sea. — Somebody calls them "imps of darkness". — They assuredly well become the land they inhabit. — When on shore I proceeded to botanize & obtained 10 different flowers; but such insignificant, ugly little flowers, as would better become an Arctic, than a Tropical country. — The birds are Strangers to Man & think him as innocent as their countrymen the huge Tortoises. Little birds within 3 & four feet, quietly hopped about the Bushes & were not frightened by stones being thrown at them. Mr King killed one with his hat & I pushed off a branch with the end of my gun a large Hawk.

Captain Fitzroy’s Journal
Weighed and stood alongshore, sounding. There was good anchorage, until near the south-west point of Stephens Bay, off which the water is shoal, and the bottom uneven. We anchored in Stephens Bay, and found an American whaler lying there. This bay is large, and the anchoring ground generally good; but the landing is bad at low water. There is no fresh water: and it is frequently difficult to enter, as well as to leave, because usually becalmed by high land, it seldom feels the true wind. Enderby Cove is only fit for a boat; at low water it is full of rocks. The Kicker Rock is a curious mass of stone, rising almost perpendicularly from the bottom of the sea, where it is thirty fathoms deep; and in the offing is another (called the Dalrymple, by Colnett), which looks exactly like a ship becalmed, with all sail set. Seeing a remarkable hill at the north-east side of the bay, which had not an appearance like other parts of the island, I went to it in a boat, hoping to find water near the foot, and to have a good view from the summit. Disappointed in both ways, the hill being composed of a crumbling sand-stone, and almost inaccessible, I returned to the ship early next morning. Several new birds were seen by those who were on shore, and many fish were caught on board, of which the best and most numerous were a kind of rock cod, of large size.
Posted by Arborfield at 13:25