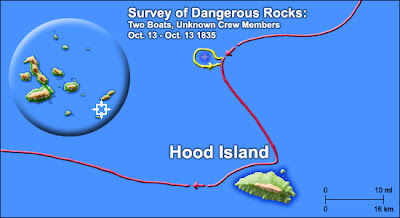 Galapagos
We all were busily employed during these days in collecting all sorts of Specimens. The little well from which our water was procured was very close to the Beach: a long Swell from the Northward having set in, the surf broke over & spoiled the fresh water. — We should have been distressed if an American Whaler had not very kindly given us three casks of water (& made us a present of a bucket of Onions). Several times during the Voyage Americans have showed themselves at least as obliging, if not more so, than any of our Countrymen would have been. Their liberality moreover has always been offered in the most hearty manner. If their prejudices against the English are as strong as our's against the Americans, they forget & smother them in an admirable manner.

Captain Fitzroy’s Journal
We had some difficulty in 'casting,' so as to clear the land, but got out of the scrape and were working towards Hood Island when the man looking out aloft reported a breaker, which proved to be on a rock at the west end of MacGowen shoal. When first seen it was on the horizon, and hardly differed from the topping of a sea;—once only in about ten minutes it showed distinctly. We steered for it, lowered two boats, and employed the rest of the day in examining this very dangerous shoal, and fixing its position. One rock at the west end is just a-wash, but there is another under water, except in the hollow of a swell, about half-a-mile to the eastward, which is exceedingly treacherous. We had two narrow escapes this day; while weighing from Chatham Island, baffling winds sent us a great deal too close to the cliffs before our anchor was up, or the ship under command; and while sounding along the edge of MacGowen shoal we were drifted so close to the second rock, mentioned above, that I was not sure on which side of us it lay.
Posted by Arborfield at 07:41