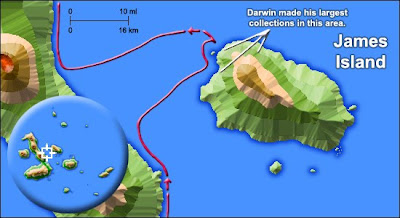 Galapagos
The weather during nearly all the time has been cloudless & the sun very powerful; if by chance the trade wind fails for an hour the heat is very oppressive. During the two last days, the Thermometer within the Tents has stood for some hours at 93°. — In the open air, in the wind & sun, only 85°. — The sand was intensely hot, the Thermometer placed in a brown kind immediately rose to 137, & how much higher it would have done I do not know: for it was not graduated above this:— The black Sand felt far hotter, so that in thick boots it was very disagreeable to pass over it.

Captain Fitzroy’s Journal
Weighed in the afternoon, having obtained the necessary observations, and went to Black Beach Road to take in wood, potatoes, and pigs. We there found a small schooner at anchor, just arrived from Guayaquil, and having, among other things, a bag of letters from England, for the Beagle. That very evening we were to leave Charles Island; not to return! In the schooner were some emigrants; who brought cattle, and information that the governor, Villamil, might be expected to arrive in a few days, with a vessel laden with animals, and supplies for the settlement. We stood across, during the night, to the four islands near Point Woodford…
Posted by Arborfield at 08:29