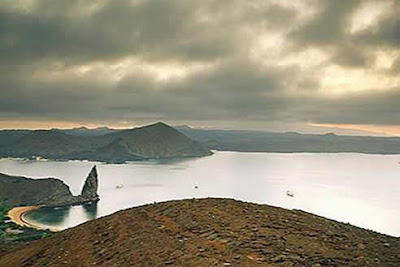 [James Island]
Galapagos
In the afternoon the Beagle sent in her boats to take us on board.

Captain Fitzroy’s Journal
… at day-light next morning resumed our usual occupations, while sailing along the east side of Albemarle Island. At noon we steered for Albany Islet, to embark Mr. Darwin and Mr. Bynoe; and after our party were on board, we returned towards the shore of Albemarle Island, and there passed the night under sail, in order to start early from a particular position. Our landsmen had enjoyed their stay and profited by it, though the heat was oppressive, and the sky nearly cloudless by night and by day: how different was this from the weather we had had on board! The higher grounds of James Island are extensive, and would be adapted to cultivation if the wood, which now grows thickly, were cleared. There is a fine salt spring, or lake, in an old crater; the salt is excellent, in colour and quality: and the men employed by Mr. Lawson were using it daily for curing their fish and terrapin.

When at some height upon the island, among the thick wood, it is extremely difficult to find the way: men have been lost thereabouts, and it is said that some of the bodies never were found. The day we re-embarked Mr. Darwin there was a man missing, belonging to an American whale ship, and his shipmates were seeking for him. The master of this whaler was very obliging to our party, supplying them with water, and offering his hearty assistance in any way which lay in his power. The earnest wishes to be of use, and the attentions of North Americans to us on all occasions, have been often and gratefully remarked by many on board the Beagle.
Posted by Arborfield at 18:39