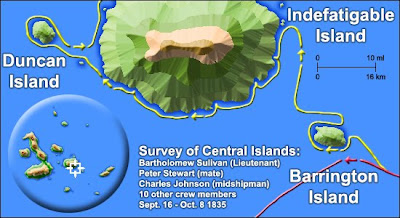 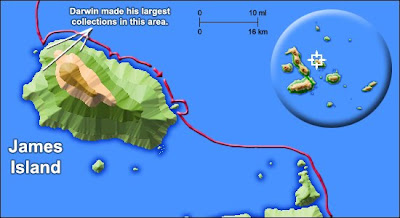 Galapagos
At last we reached James Island, the rendezvous of Mr Sulivan. — Myself, Mr Bynoe & three men were landed with provisions, there to wait till the ship returned from watering at Chatham Isd. — We found on the Isld a party of men sent by Mr Lawson from Charles Isd to salt fish & Tortoise meat (& procure oil from the latter). — Near to our Bivouacing place, there was a miserable little Spring of Water. — We employed these men to bring us sufficient for our daily consumption. — We pitched our tents in a small valley a little way from the Beach. — The little Bay was formed by two old Craters: in this island as in all the others the mouths from which the Lavas have flowed are thickly studded over the country.

Captain Fitzroy’s Journal
The Beagle was close to James Island, a high, large, and well-wooded tract of ground, or rather lava. We anchored at the northern end, and a boat came alongside loaded with fish, for there was a party of settlers here, detached from Charles Island, whose employment was salting fish and extracting oil from terrapin. This oil is of a light colour, and exceedingly good quality, being very like pure olive oil.

Lieutenant Sulivan returned with his party, and I then detached Mr. Chaffers in the yawl, accompanied by Mr. Johnson and six men, to examine Bindloes, Abingdon, and Towers Islands. As Mr. Darwin anxiously desired to see as much as possible of the productions of this central and large island, he was landed, accompanied by Mr. Bynoe, besides his servant and H. Fuller, to remain until the Beagle's return. Although there is abundance of water on the higher parts of this island, so broken and dry are the lower grounds that it does not arrive at the shore: at two places only can enough water for even a boat's crew be procured, in the dry season; and for a ship there is scarcely hope of a sufficiency. The poor fellows who brought us the fish had been living so long upon terrapin, and the produce of their lines, without any thing else, that half a bag of biscuit (50 lbs.) which we gave them, appeared to be an inestimable treasure, for which they could not sufficiently thank us.

We sailed in the evening, but made very little progress towards our destination (Chatham Island).
Posted by Arborfield at 07:45