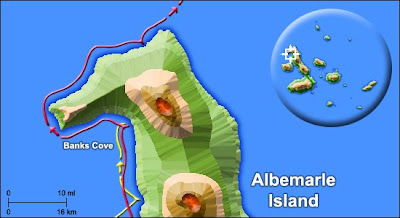 Galapagos
We then stood round the North end of Albermale Island. — The whole of this has the same sterile dry appearance; is studded with the small Craters which are appendages to the great Volcanic mounds, — & from which in very many places the black Lava has flowed, the configuration of the streams being like that of so much mud. — I should think it would be difficult to find in the intertropical latitudes a piece of land 75 miles long, so entirely useless to man or the larger animals. — From the evening of this day to the 8th was most unpleasant passed in struggling to get about 50 miles to Windward against a strong current.

Captain Fitzroy’s Journal
Mr. Mellersh returned, having examined Elizabeth Bay and the western shore of Narborough Island. We then went round the north-west end of Albemarle Island, and passed the night under sail off the north extreme.
Posted by Arborfield at 21:17