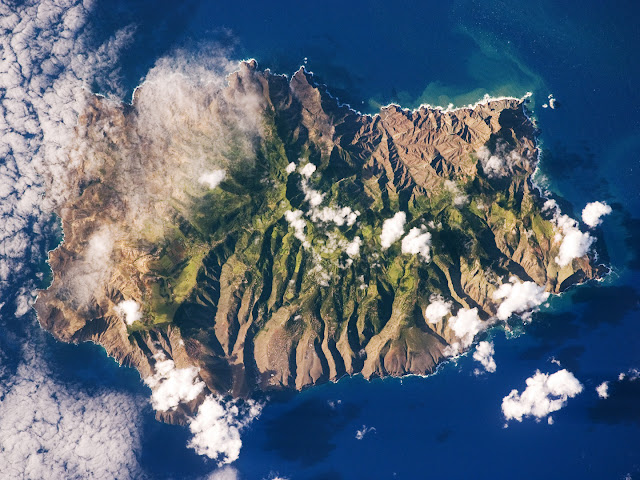 I obtained lodgings in a cottage within stone's throw of Napoleon's tomb. I confess this latter fact possessed with me but little inducement. The one step between the sublime & the ridiculous has on this subject been too often passed. Besides, a tomb situated close by cottages & a frequented road does not create feelings in unison with the imagined resting place of so great a spirit. — With respect to the house in which Napoleon died, its state is scandalous, to see the filthy & deserted rooms, scored with the names of visitors, to my mind was like beholding some ancient ruin wantonly disfigured.— During the four days I staid in this central position, from morning to night I wandered over the Isd & examined its geological history. The house was situated at an elevation of about 2000 ft; here the weather was cold & very boisterous, with constant showers of rain; — every now & then the whole scene was veiled by thick clouds.
Near to the coast the rough lava is entirely destitute of vegetation; in the central & higher parts a different series of rocks have, from extreme decomposition, produced a clayey soil which is stained in broad bands of many colours, such as purple, red, white & yellow.— At this season, the land moistened by constant showers produces a singularly bright green pasture; this lower & lower down gradually fades away & at last disappears. — In latitude 16° & at the trifling elevation of 1500 ft, it is surprising to behold a vegetation possessing a decided English character. But such is the case; the hills are crowned with irregular plantations of scotch firs; the sloping banks are thickly scattered over with thickets of gorze, covered with its bright yellow flowers; along the course of the rivulets weeping willows are common, & the hedges are formed of the blackberry, producing its well known fruit. When we consider the proportional numbers of indigenous plants being 52, to 424 imported species, of which latter so many come from England, we see the cause of this resemblance in character. These numerous species, which have been so recently introduced, can hardly have failed to have destroyed some of the native kinds. I believe there is not any account extant of the vegetation at the period when the island was covered with trees; such would have formed a most curious comparison with its present sterile condition and limited Flora. It is not improbable that even at the present day similar changes may be in progress. — Many English plants appear to flourish here better than in their native country; some also from the opposite quarter of Australia succeed remarkably well, & it is only on the highest & steep mountain crests where the native Flora is predominant. The English, or rather the Welsh character of the scenery, is kept up by the numerous cottages & small white houses, some buried at the bottom of the deepest valleys & others stuck up on the lofty ridges. — Certainly some of the views are very striking; I may instance that of Sir W. Doverton's house, where the bold peak called Lott is seen over a dark wood of firs, the whole being backed by the red, waterworn mountains of the Southern shore. —
But a glowing tropical style of landscape would have afforded a finer contrast than the homely English scenery, with the wile arid rocks of the coast.
Posted by Arborfield at 08:21