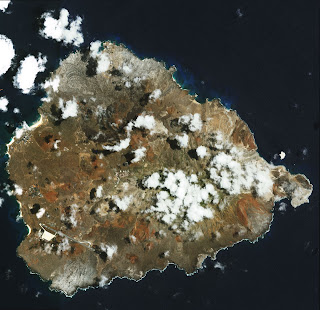 Reached the anchorage in the afternoon, & received some letters. This alone with such a surrounding scene, was capable of producing pleasant sensations. Those who have beheld a volcanic Island, situated within an arid climate, will be able at once to picture to themselves the aspect of Ascension. They will imagine smooth conical hills of a bright red colour, with their summits generally truncated, rising distinct out of a level surface of black horrid lava. —  A principal mound in the centre of the Island seems the father of the lesser cones. It is called Green Hill, its name is taken from the faintest tinge of that colour, which at this time was barely perceptible from the anchorage. To complete this desolate scene, the black rocks on the coast are lashed by a wild turbulent sea. The settlement is near the beach, it consists of several houses & barracks, placed irregularly but well built of white freestone. The only inhabitants are Marines & some negroes liberated from slave ships, who are paid & victualled by government: there is not a private person on the island. Many of the Marines appeared well contented with their situation: they think it better to serve their one & twenty years on shore, let it be what it may, than in a Ship. — With which choice, if I was a Marine, I should most heartily agree.
Posted by Arborfield at 08:04