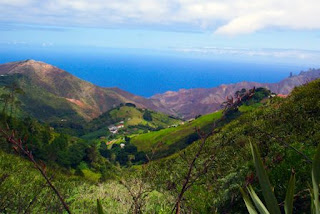 My guide was an elderly man, who had been a goatherd when a boy, & knew every step amongst the rocks. He was of a race many times mixed, & although with a dusky skin, he had not the disagreeable expression of a Mulatto: he was a very civil, quiet old man, & this appears the character of the greater part of the lower class. — It was strange to my ears to hear a man nearly white, & respectably dressed, talking with indifference of the times when he was a slave. — With my companion, who carried our dinners & a horn of water, which latter is quite necessary, as all in the lower valleys is saline, I every day took long walks. Beyond the limits of the elevated & central green circle, the wild valleys are quite desolate & untenanted. Here to the geologist, there are scenes of interest, which shew the successive changes & complicated violence, which have in past times happened. According to my views, St Helena has existed as an Isd from a very remote period, but that originally like most Volcanic Isds it has been raised in mass from beneath the waters. St Helena, situated so remote from any continent, in the midst of a great ocean & possessing an unique Flora, this little world, within itself excites our curiosity. — Birds & insects, as might be expected, are very few in number, indeed I believe all the birds have been introduced within late years. — Partridges & pheasant are tolerably abundant; the Isd is far too English not to be subject to strict game laws. I was told of a more unjust sacrifice to such ordinances, than I ever heard of even in England: the poor people formerly used to burn a plant which grows on the coast rocks, & export soda; — a peremptory order came out to prohibit this practice, giving as a reason, that the Partridges would have no where to build!
Posted by Arborfield at 07:09