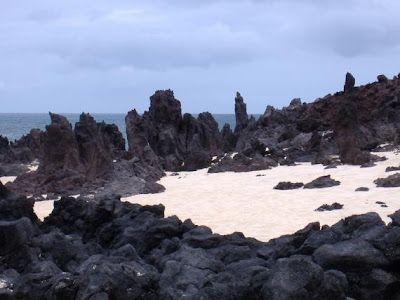 On the two succeeding days I took long walks & examined some rather curious points in the mineralogical composition of some of the Volcanic rocks, to which I was guided by the kindness of Lieut. Evans. One day I walked to the SW extremity of the Isld: the day was clear & hot, & I saw the Island not smiling with beauty, but staring with naked hideousness. — The lava streams are covered with hummocks, & are rugged to a degree which geologically speaking is not of easy explanation. The intervening spaces are concealed with layers of pumice, ashes, & volcanic sandstone. In some parts, rounded volcanic bombs, which must have assumed this form when projected red hot from the crater, lie strewed on the surface. When passing this end of the Isld at sea, I could not imagine the cause of the white patches, with which the whole plain was mottled: I now found out it was owing to the number of seafowl, which sleep in such full confidence, as even in midday to allow a man to walk up to & seize hold of them. These birds were the only living creatures I this day saw. On the beach a great sea, although the breeze was light, was tumbling over the broken lava rocks. — The ocean is a raging monster, insult him a thousand miles distant, & his great carcase is stirred with anger through half an hemisphere.
Posted by Arborfield at 07:33