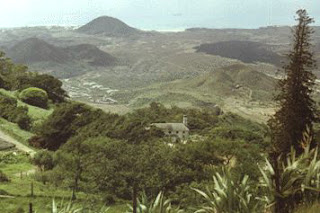 The next morning I ascended Green Hill, 2,840 ft high, & walked from thence across the Isd to the windward point. — A good cart road leads from the coast settlement to the houses, gardens & fields placed near the summit of the central mountain. On the road side are milestones & cisterns, where each thirsty passer by can drink some good water. Similar care is displayed in each part of the establishment, & especially in the management of the Springs, so that a single drop of water shall not be lost. Indeed the whole Isld may be compared to [a] huge Ship kept in first rate order. I could not help, when admiring the active industry which has created such effects out of such means, at the same time regretting that it was wasted on so poor & trifling an end. — M. Lesson has remarked with justice that the English nation alone would ever have thought of making the Isd of Ascension a productive spot; any other people would have held it, without any further views, as a mere fortress in the ocean.
Near the coast, nothing grows, a little inland, an occasional green Castor oil plant & a few grasshoppers, true friends of the desert, may be met with. On the central elevated parts, some grass is scattered over the surface, much resembling the worse parts of the Welsh mountains. But scanty as it appears, about six hundred sheep, many goats, a few cows & horses, all thrive well. Of native animals, rats, mice, land-crabs are abundant: — of Birds the guinea-fowl imported from the C. Verd's, swarm in great numbers. — The Isd is entirely destitute of trees, in which & in every other respect it is very far inferior to St Helena. Mr Dring tells me that the witty people of the latter place say "We know we live on a rock, but the poor people at Ascension live on a cinder": the distinction is in truth very just.
Posted by Arborfield at 07:37