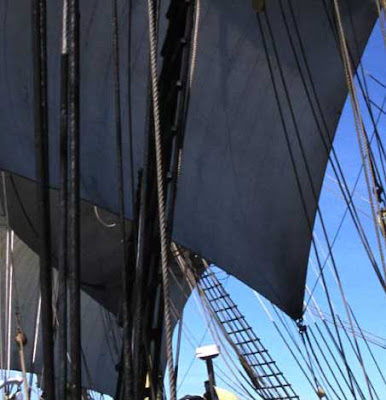 Rio de Janeiro to Monte Video
In the afternoon the calm was broken by a stiff breeze, almost a gale: (i.e. a very heavy one in a Landsman's eyes). We first lowered the Top-gallant yards, & then struck the masts. This was the first time that I have been able to look about, when there has been anything of a sea up. It was a beautiful spectacle to see how gracefully the Beagle glided over the waves, appearing as if by her own choice she avoided the heavy shocks. As the night came on, the sky looked very dirty, & the waves with their white crests dashed angrily against the ships sides. In the middle watch however the wind fell & was succeded by a calm: this is always the worst part of a gale, for the ship not being steadied by the wind pressing on the sails rolls in a most uncomfortable manner between the troughs of the sea.
Posted by Arborfield at 07:40