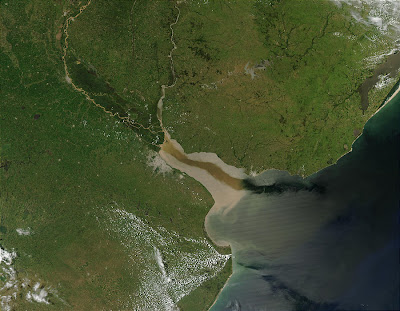 Rio de Janeiro to Montevideo
All day we have been beating up the river, & now at night are come to an anchor. We were generally at the distance of four or five miles from the Northern shore. Thus seen, it presented a most uniform appearance, a long straight line of sandy beach was surmounted by a sloping bank of green turf. On this viewed through a glass were large herds of cattle feeding. Not a tree broke the continuity of outline: & I only observed one hut, near to which was the Corral or enclosure of stakes, so frequently mentioned by all travellers in the Pampas. I am afraid we shall not even tomorrow reach M. Video.
Posted by Arborfield at 22:11