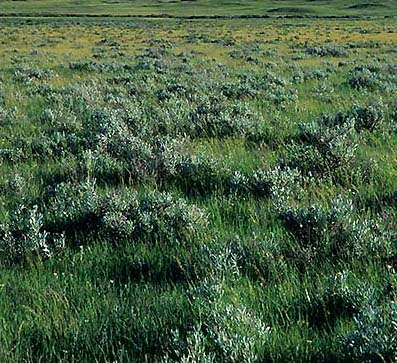 Montevideo
Landed early in the morning on the Mount. This little hill is about 450 feet high & being by far the most elevated land in the country gives the name Monte Video. The view from the summit is one of the most uninteresting I ever beheld. Not a tree or a house or trace of cultivation give cheerfulness to the scene. An undulating green plain & large herds of cattle has not even the charm of novelty. Whoever has seen Cambridgeshire if in his mind he changes arable into pasture ground & roots out every tree, may say he has seen Monte Video.
Although this is true, yet there is a charm in the unconfined feeling of walking. over the boundless turf plain: Moreover if your view is limited to a small space, many objects possess great beauty. Some of the smallest birds are most brilliantly coloured; much more so than those in Brazil. The bright green turf being browsed short by the cattle, is ornamented by dwarf flowers; amongst which to my eyes the Daisy claimed the place of an old friend. The only other plants of larger size are tall rushes & a thistle resembling much the Acanthus; this latter with its silvery foliage covers large spaces of ground.
I went on board with a party of midshipmen; who had been shooting & had killed several brace of Partridges & wild Ducks, & had caught a large Guano nearly about 3 feet long. These lizards at certain times of the year are reckoned excellent food.
The evening was calm & bright, but in the middle of night it blew a sudden gale. All hands were piped up to send Top-gallant masts on deck & to get in the Cutter: In such scenes of confusion, I am doubtful whether the war of the elements or shouts of the officers be most discordant.
Posted by Arborfield at 08:17