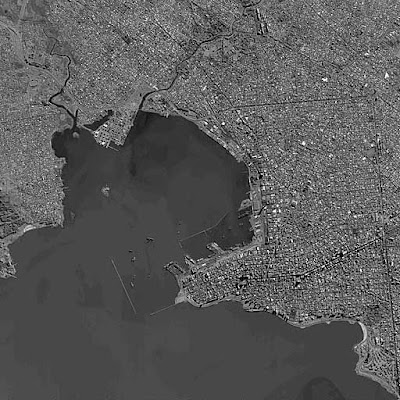 [Modern Montevideo]
Montevideo
We entered the bay about 9 oclock: just as we were coming to an anchor, signals were made from the Druid, a frigate lying here; which (to our utter astonishment & amusement) ordered us to "Clear for action" & shortly afterward "Prepare to cover our boats". We set sail again & the latter part of order was shortly explained by the arriving of 6 boats heavily armed with Carronades & containing about 70 marines, all ready for fighting, & more than 100 blue-jackets.
Captain Hamilton came on board & informed us that the present government is a military usurpation, and that the head of the party had seized upon 400 horses, the property of a British subject; & that in short the flotilla of boats went to give weight to his arguments. The revolutions in these countries are quite laughable; some few years ago in Buenos Ayres, they had 14 revolutions in 12 months, things go as quietly as possible; both parties dislike the sight of blood; & so that the one which appears the strongest gains the day. The disturbances do not much affect the inhabitants of the town, for both parties find it best to protect private property.
The present governor has about 260 Gaucho cavalry & about same number of Negro infantry, the opposite party is now collecting a force & the moment he enters the town the others will scamper out. Mr Parry (a leading merchant here) says he is quite certain a 150 men from the Frigate could any night take M: Video. The dispute has terminated by a promise of restitution of the horses; but which I do not think is very clear will be kept. — I am afraid, it is not impossible that the consequences will be very unpleasant to us: The Druids officers have not for some weeks been allowed to go on shore, & perhaps we shall be obliged to act in the same manner. How annoying will be the sight of green turf plains, whilst we are performing a sort of quarantine on board.
Posted by Arborfield at 08:06