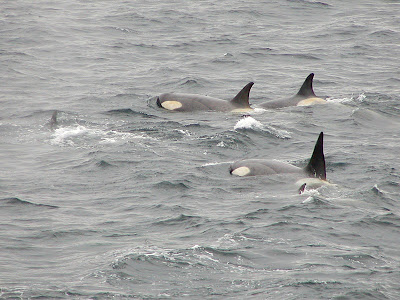 Rio de Janeiro to Montevideo
From noon of yesterday to the same time to day we had run 160 knots & all congratulated ourselves on soon doubling Cape St Mary's. — On the contrary however we experienced the true uncertainty of a sailors life. — By the evening it blew a gale right in our teeth. — Top-gallant masts were sent on deck. — & with close reefed main top-sail, trysails & fore sails, we beat up against a heavy sea. —
We are about 80 miles from the Morro de St Martha. — It is a curious fact, that often as the different officers have passed this point they have always met a gale. — The Beagle, on her return to England from the last expedition, experienced the heaviest she had had during the whole time. — In the morning I was much interested by watching a large herd of Grampuses, which followed the ship for some time. — They were about 15 feet in length, & generally rose together, cutting & splashing the water with great violence. — In the distance some whales were seen blowing. — All these have been the black whale. — The Spermaceti is the sort which the Southern Whalers pursue. —
There was a good deal of sea up & I in consequence, with my spirits a good deal down.
Posted by Arborfield at 07:14