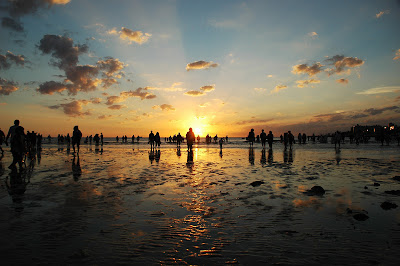 [Image: TrekEarth - Montevideo seafront]
Montevideo
At one oclock we stood out of the Bay with a light fair wind. As we passed the Druid, we picked up Mr Hammond, a Midshipman belonging to her who has now joined the Beagle. Mr Hammond is a connection of poor little Musters.
Before sailing, I went ashore to the Town with the Captain; the appearance of the place does not speak much in its favor; it is of no great size; possesses no architectural beauties, & the streets are irregular & filthily dirty. It is scarcely credible that any degree of indolence would permit the roads to be in such a bad state as they are. The bed of a torrent with blocks of stone lying in mud. is an exact resemblance. It was distressing to see the efforts of the Bullocks, as harnessed by their horns to the clumsy carts they managed to stumble on amongst the stones. As far as regards the inhabitants, they are a much finer set than at Rio de Janeiro. Many of the men have handsome expressive faces & athletic figures; either of which it is very rare to meet with amongst the Portugeese. I believe in about a weeks time we shall return to M. Video & complete our equipment.
Posted by Arborfield at 07:11